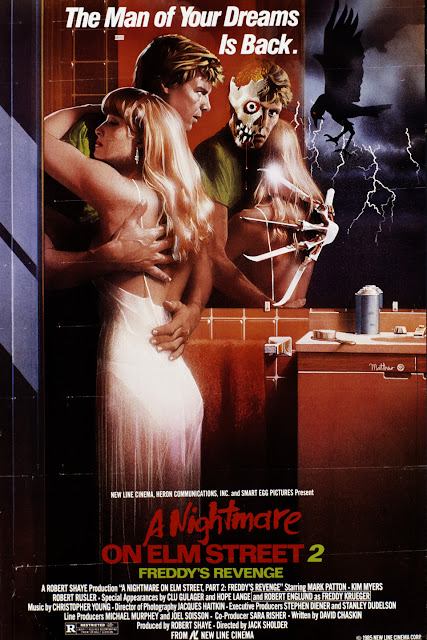 The blog of your dreams is back, too, as this installment of Cinemachine features a very special audio commentary track for the much-maligned black sheep sequel, A Nightmare on Elm Street 2: Freddy's Revenge!

What to make of a sequel that doesn't seem to care terribly much for its predecessor? One made in a hurry to cash in quick on that predecessor's success, that isn't preoccupied with being an identical successor? Freddy's Revenge is one of the most idiosyncratic sequels in horror franchise history, perhaps even moreso than in-name-only sequels like Halloween III: Season of the Witch because of what is shared with the previous film rather than what's different: teenagers, Elm Street, nightmares and of course Freddy are all back, but the similarities more or less end there.

What is new is a now infamous subtext of homosexual (or at least bisexual) urges suppressed and violently surfacing - subtext which is not at all subtle yet apparently went largely unnoticed in the homo-unconscious 80s and for many years since until the Elm Street series documentary Never Sleep Again made it official. A revaluing is in order not only for the thematics of teenage closet case drama but the ways in which director Jack Sholder and writer David Chaskin pulled a quickie sequel out of their asses (so to speak) and actually came up with some more creative ideas than the latter half of the increasingly campy and special effects heavy series. Which isn't to say Freddy's Revenge is not campy - this is the homo nightmare on elm street after all - but in the context of the gay subtext the camp actually has more place than later on in the series when Freddy killed a kid with a video game just because Nintendo was a topical reference in 1991.

Joining me on this odyssey is my friend Tom Chiki, who you may remember joined me in commentary on Friday the 13th Part 2 (see the sidebar for a link) and was good enough to accompany this full length analysis of the least elaborate - and conversely most bizarre - sequel in the very bizarre Nightmare series. Enjoy - and whatever you do, don't fall asleep.
Posted by Unknown at 1:47 PM

Of course, the granddaddy of quickie sequels--SON OF KONG--actually gave Robert Armstrong a woman, something he'd given up in the first one.

Wait, am I trying too hard to bring it into the context of unfulfilled desires?

I really wish the poster had been a reflection of him groping a dude. Michael Bay and his boys really missed the opportunity to do a sequel with a kid coming out thanks to Freddy. The thing writes itself... the kid's dad is an abusive, homophobic jerk, the mom's disinterested... writes its damn self.