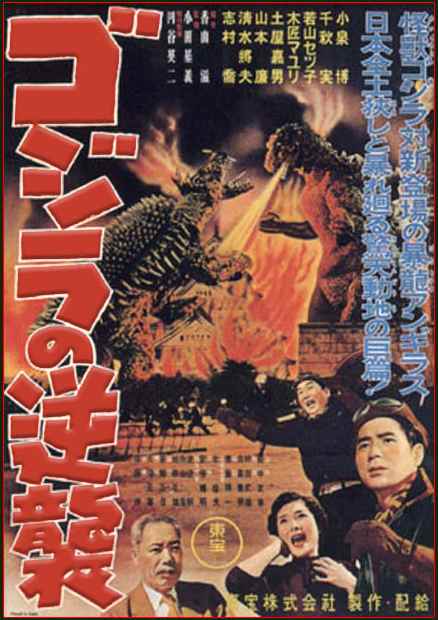 Godzilla Raids Again was released in Japan a year after the original and despite remaining in black and white, the tone of the series has gotten a lot lighter already. Another aspect nailed down right away is the idea of pitting Godzilla against other monsters, although the monster vs. monster fight is resolved midway through the film. If the original Godzilla was a somber spectacle of 1950s atomic sci-fi, the follow-up leaps headfirst into the optimism of Japan's rapid postwar economic growth, and fighting Godzilla actually looks a little fun instead of almost horrifyingly futile.
The stodgy scientists protagonists have been replaced by a charming tuna cannery pilot, his cannery switchboard girl fiance and his beta male co-pilot best friend. There's a sweetness between the three of them and their chemistry is out of a Hollywood light comedy from ten years earlier. Even the nightclub and city scenes play straight from World War II with air raid sirens going off to signal the approaching monsters. There's a delightful drunken company party scene with the three leads making jokes about marriage in a display of convincing adult joviality I wasn't excepting from decades of apparently kid-oriented Godzilla films. The eventual American cut even removed an entire subplot about the best friend having a crush on another cannery co-worker. Amidst the smaller more personal story being told this time around, the only real grimness to carry over from the original film is a couple instances of aftermath from Godzilla's brush-up with Anguirus the prehistoric Ankylosaur. Unlike the first film, the damage is predominantly shown as crumbling or flaming cityscapes instead of explicit human loss.
The first Godzilla hadn't been released in America by the time Godzilla Raids Again was released in Japan. This does not explain why the American release title was Gigantis the Fire Monster when the Raymond Burred Godzilla, King of the Monsters! had already been a hit and they didn't try to cash in on that popularity, unless they figured Raymond Burr was essential. Technically this is another Godzilla creature (the one who lives to be retained for the remained of the series) so the tethers between the films were easier to sever. Godzilla's roar was even changed to that of Anguirus. For these reasons Raids Again was considered the "lost" Godzilla film by fans. The Japanese version was not available until DVD and is a world of difference from the cheesily dubbed and choppily edited American cut.
Although the effects are designed by Eliji Tsuburaya once again, the Godzilla head puppets in this one have a serious overbite. Also like the original, the black and white helps the monster suits and miniatures. Unfortunately two men in monster suits look faker than just one. When the footage is sped up during  their final fight in Osaka, the added artificiality helps push the sumo antics into herky jerky King Kong stop-motion aesthetics.
Godzilla Raids Again is not compelling on a thematic level as there do not seem to be any themes involved. The nightclub air raid scene recalls World War II only momentarily before leading directly into an elaborate cops and robbers chase that causes a plot point to happen. The cast is a welcome surprise. The giant monster action is about on par with the original, so the colorful kid shows that came later probably had the advantage. Therefore this film is, despite being very well made, unlikely to satisfy either G-fans of the high camp to come or serious minded atomic horror fans who appreciated the original. I enjoyed but would most strongly recommend this to fans of films life in Japan at the time, and old fashioned light comedy-dramas.
Posted by Unknown at 5:55 PM