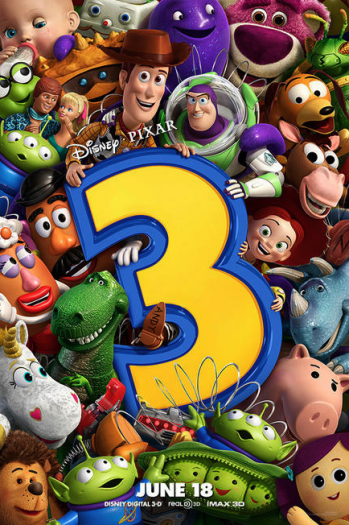 It's hard to get an idea of what would be an animated feature in these times that retains all its integrity... you even zero in on the admirably preachy, 2D throwback short!

I knew I could count on you to see enfranchisement in an anti-enfranchisement film, and leftist passivity in clear do-goody Hollywood product. I won't disagree, though. TOY STORY 3 is more an example than it is not-an-example of narrative accessibility taking over animated creation. Humor has been squeezed into a Gen Y box of sanctioned "hip humor," and inconsequential, market-tested characters are abound. I'm always put off by a running theme of yours of castration by way of humanist or pacifist sentiment, but eh, it's also one of the reasons I keep coming back here. Your barb on Andy's fatherlessness is just your A-game at first, but now it seems pretty darn emblematic of Friendly Formula 101 and egregious shorthand.


Your banners are always killer BTW.