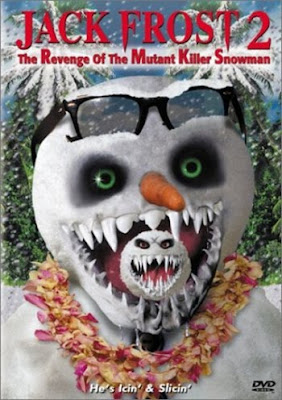 Jack Frost 2 is one of the most genial and good natured wastes of time I've ever experienced.

The 1997 original had as much going for it as a killer snowman movie could, namely lots of Christmas themed deaths, a gravelly voiced actor providing the post-mortem one-liners (Scott MacDonald), and ample screen time for the titular villain whose full size puppet body did not appear made of snow in the least bit. British writer-director Michael Cooney also had the good fortune to release his barrel bottom-scraping gimmick slasher the year before a mainstream family film starring Michael Keaton was released with the same title and basic premise, which made for a great joke in swapping what used to be called "tapes" behind the "boxes" at the "video store." Combined with a holographic cover that morphed a smiling snowman's face into a toothy snow demon as you walked past - easily the most inspired horror video gimmick since Frankenhooker's talking "Wanna date?" box. Jack Frost was a hit because really, what horror fan with a sense of humor could pass up the world's first and only killer snowman movie?

Despite the first film's success I don't think anyone really expected to see yet another holographic evil snowman face on the shelves three years later, this time wearing sunglasses and a tropical flower wreath. Cooney was apparently tasked with creating a sequel on a fraction of the original's budget and embraced the limitation creatively, sending Jack on his revenge in the least likely place to find a snowman. Jack Frost 2 is effectively the Jaws: The Revenge of killer snowman movies except at some point there actually is an explanation as to how Frost knows which tropical island to find his targets on, thousands of miles away. Cooney also has a creative solution to the unfortunate fact that his snowman's screen time is only budgeted for about two minutes: Jack must reconstruct himself by gathering eye coal, nose carrot and scarf from various places before making his grand entrance. Although implied rather than explained, Jack also can't hide in plain sight as an ordinary snowman when on a beach.

Cooney justifies Jack's much more low key tactics by elaborating upon his water based powers, which makes most of the story feel like a slasher produced by Marvel Comics. When a fashion model needs ice to excite her nipples during a bikini photo shoot, who else but Frost manages to sneak into the cooler and disguise himself as the cubes? Talk about cheap thrills - with merely a few close ups of the cubes in the girl's mouth and some lascivious voice over work from Scott MacDonald, Cooney created the entire film's standout scene. Few movies ever take advantage of their disadvantages so deftly.

Besides Cooney's inventiveness the sequel's second strongest suit is the heavy continuity from the first film embodied by many affable returning characters. They're all from the world of sitcom bit playing and are well suited to playing off each other in an understated way. Beside David Allen Brooks as the goofy "Agent Manners" all of the middle aged actors are playing middle aged couples on vacation, which when combined with the ultra-cheap special effects sometimes gives this film the impression of a home horror movie made by and starring someone's randomly selected middle American suburbanite parents. Especially good is the recently departed Christopher Allport, reprising his lead role as Jack's heroic antagonist to the full hilt of straight faced deadpan seriousness.

Enjoying Jack Frost 2: The Snowman Goes Hawaiian rests largely on noticing that everyone returning from the first one can't believe they're getting paid to do this nonsense again and are visibly enjoying themselves. Cooney is at least merciful enough to spare the fourth wall and not let them get too glib, at least not compared to the incredulity he'd have encountered from a new roster of actors to act terrified of a full body snowman puppet looking even worse than the last one.

The only real bringdown to all this self-effacing revelry is the second tier of cast. Not even the bottom tier of teen meat - under the cheeky adult sensibilities of Cooney, the hot bodied brahs and bimbos waiting to be stabbed by icicles are so deliberately one dimensional they're amusing. The problem is the staff of the resort island, the other actors cast to play original characters alongside the returners. Their lame comic stereotypes are actually the only pronounced touch of Anglicism from the English Cooney: a yah-mon Jamaican, an mustachioed colonel who has inexplicably walked out from the days of British India, and a holiday camp style master of ceremonies whose name - Captain Fun - is the only funny thing about him. They are all painfully unfunny and unfortunately live much, much longer than any of the teen meat.

The last act is what really pushes the viewer into coming down hard against the movie in spite of the goodwill Cooney & Co. have so far generated. Due to a minor injury, Frost retreats out of sight once again shortly after finally revealing himself and in his place a litter of toothy snowball spawn pop up. The little buggers simply can't move without aid from bad TV quality CGI and some of the most inanimate puppetry this side of Rick Sloane. Instead of being merely unseen, Frost disappears from his own movie as Cooney lifelessly reenacts the bar scene from Gremlins within his own version of Gremlins 2. Snowballs on the loose may have been some attempt at upping the Winter quotient of a holiday horror movie jokingly set in the tropics. They should've spent those few extra bucks on a precious few more minutes of screentime for their neglected star villain. At least when someone figures out how to kill his offspring there's an emotional arc for Jack that was missing from the first time.

Jack Frost 2 is a hard movie to be mad at, much less disappointed with. A movie's got to know its limitations and with the bar of expectations so low, a moderately clever chap like Cooney has nowhere to go but up. The overall lack of killer snowman is made up for by the ludicrousness of said killer snowman's water molecules on the loose, and fans of the first film get all the principal cast members back. Only when the snowballs show up does the experience get boring, and divorcing the Christmas theme from the context of a killer snowman movie was a big mistake. Otherwise anyone who enjoyed the original should be able to enjoy themselves with this one. If you didn't, the risk hinges solely on your mood.
Posted by Unknown at 3:30 PM