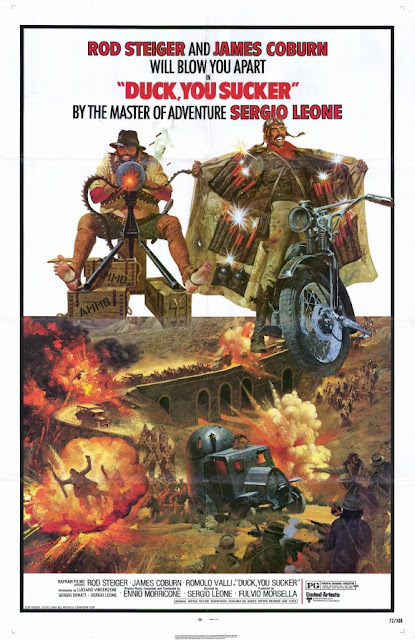 Opening with a quote from Mao Tse-Tung, Sergio Leone immediately establishes Duck, You Sucker in a thoughtful, postmodern mold very separate from his own "Man With No Name" Clint Eastwood trilogy. The opening shot of Rod Steiger taking a piss on an anthill doubles as both political metaphor and literal piss-take on the first scenes of Sam Peckinpah's recent The Wild Bunch which, one surmises, stole a lot of credit for "reinventing" the Western simply due to Peckinpah's status as member of the "New Hollywood." What's pleasantly surprising about this film in light of the initial thematic volleys is that the drama between leads Steiger and James Coburn contains some of Leone's most humane  and empathic characterization in his entire oeuvre, and unlike Quentin Tarnatino's shallow Inglourious Basterds the gentle dollop of postmodernism is a pointed elucidation of how the old fashioned Western film was being steamrolled by an increasingly politically complex world. This film is an unjustly forgotten work of unique brilliance.

The Mao quote, cut from the initial American release for sensitive Nixonland audiences, reads in huge font a few words at a time: The revolution is not a social dinner, a literary event, a drawing or an embroidery; it cannot be done with elegance and courtesy. The revolution is an act of violence. In other words - all you men of highfalutin words - get ready for the blood and dirt, not the romance. Duck, you sucker! - Even the title was chosen in communication to Western audiences - Leone was misinformed the phrase was common American slang.

Set three years into the Mexican Revolution, Leone's relative indifference to Mexican politics gives him primarily the perspective of a dramatist in regard to war and revolution, specifically an action-adventure filmmaker. Political factions and social classes are presented in the broadest strokes. Only Coburn and Steiger have ideological shades and as such their characters are outsiders: Coburn an IRA revolutionary in exile and Steiger an apolitical bandito. Through their adventures Leone illustrates that while the individualists who thrived in the "Wild West" could sometimes cunningly profit from the violent rearrangement of political order - as seen in the third act of the Civil War set The Good The Bad and the Ugly - their days of self service were numbered as some semblance of civil law settled across North America.

Middle class Marxists must have been scratching their heads at how such an apparently political film, one of whose release titles was even Once Upon A Time...The Revolution, could be subsequently wholly unconcerned with Capitalism or Communism, mostly indifferent to class identities and impassioned only regarding the demise of the Wild West on the cusp of the first World War. Primarily Leone made an action-adventure film as he had been doing, exploiting a checklist of wartime hazards like political imprisonment, asylum, extradition, execution and torture for their filmic potential and not as agit-prop.

The film's introductory sequence is its most populist, yet tempered with a lack of sentimentality. After relieving himself on the sand hill ants, Steiger hitches a ride with a caravan of really despicable ruling class elitists. They proceed to relieve their bladders on him psychically, mocking the ignorance and filthiness of the common peasantry. Soon they are all robbed and stripped nude by said peasants, against whom Leone invites us to identify. They are every bit as filthy, uneducated and barbaric as the snobs described them. No idealization of the proletariat here: when Steiger makes motions as if he's going to ravage the lady who regarded him as trash, the uneasy feeling crosses your mind that Leone is not out to ennoble anyone.

Coburn and Steiger are probably one of the all time great unheralded mismatches of buddy adventure films. Their personality dynamic is a slight echo of Clint Eastwood and Eli Wallach in The Good The Bad and The Ugly, with Coburn as the steely eyed tight-lipped man of action and Steiger the hilariously manic wild gun. Wallach and Steiger are also both non-Mexicans playing Mexican characters. While this ethnic lookalike casting isn't as formalized as Leone's judenfrei epic final film about Jewish gangsters, Once Upon a Time In America both Steiger and Coburn's identities are the main forces catapulting them through what are essentially a series of very loosely connected episodes over a running time of 2 hours and 40 minutes.

Coburn is an Irishman on the run from the British and volunteering his explosives expertise (there's that broad brush) to what he deems another worthy cause, the anti-Federalist militias of Pancho Villa and Zapata. Steiger is merely an illiterate small time crook whose gang literally consists of his extended family, and as far as he cares the rest of Mexico can take care of itself. One outlaw embodies the world's oldest definitions of the word: he's a tribal brigand whose nomadic pillaging is made possible by the lack of safeguards we take for granted in advanced civilizations, specifically a highway police patrol. The other is a force of pure modernism, literally appearing to Steiger over the horizon riding a motorcycle and carrying ideology in his load as well as self-preservation.

What unites the two is that both recognize see opportunities in the confusion of war. At first their enlistment of each others skills are farcical, Coburn playing Steiger's greed for pro-revolutionary political ends. As the horrors of war play out, a strange camaraderie develops until they're eventually fighting for each others lives as friends. Despite the abrasive title, Duck, You Sucker is one of the purest odes to the bonds of human friendship as a force stronger than race, money or country that I've ever seen.

The film is also a fabulous adventure which Leone distinguishes from his previous accomplishments by orchestrating large scale scenes of crowds and combat to further emphasize the crashing tidal wave of history. In one show stopping set piece the director outdoes his famous bridge-dynamiting scene from The Good The Bad and The Ugly by having Coburn and Steiger mount gatling guns on a hillside against an approaching unit of Federal soldiers on horseback below them. Coburn then explodes a bridge to thwart an oncoming tank, that new and frightening piece of mechanized fighting technology sweeping about to thunder across the other side of the ocean. The chief villain is also a nod to the future; a German mercenary turned army colonel.

The brilliance from a genre standpoint amounts here to making a Western about war with the style of the former and spectacle of the latter. Leone's direction of war scenes are much better than expected from a filmmaker whose trademark speciality is the Mano-a-mano duel and the elaborate climax featuring a train full of dynamite and a huge nighttime battle between Federales and revolutionaries is unforgettable.

Duck, You Sucker was unfortunately trimmed by 16 minutes for the US theatrical release and robbed of the most richly interpretive material: the aforementioned Mao and anthill opening, the entirety of Steiger's humiliation of the bourgeoisie he robs, and a harrowing scene inspired by the art of Francisco Goya depicting the execution by firing squad of Coburn's Mexican revolutionary compatriots. The rerelease of a restored print on DVD unfortunately has not yet given the film its due amongst Western fans or fans of period cinema. Perhaps the between-genres nature of the work defies an easy niche now as then. There's certainly no reason for Leone fans not to tout this as among his best - all his strengths from lavish location photography to beautiful costume and production design to the alternately playful and melancholy music of Ennio Morricone are infused together in perfect auteurist synthesis.

Western films have always used their proximity to the American Civil War to advance perfunctory plot points. Western films of the 1970s could sometimes examine their waning cultural stature in a wistful, nostalgic manner as John Wayne's final film The Shootist (1976, Don Siegel) would dramatize by afflicting his character with cancer. Without recognition, Sergio Leone made the quintessential final statement on the end of the Western film's heyday and a simultaneous word of caution against the push to make politically charged Revolutionary Films the successor of black-and-white historical morality plays. The film's opening quote from Mao could have just as easily been William Tecumseh Sherman's infamous admonition to young soldiers that there's many a boy who looks on war as all glory, but it's all hell. In the end Coburn and Steiger are changed inexorably and unlike The Man With No Name, there's no riding into the sunset through the fog of war.
Posted by Unknown at 6:14 PM