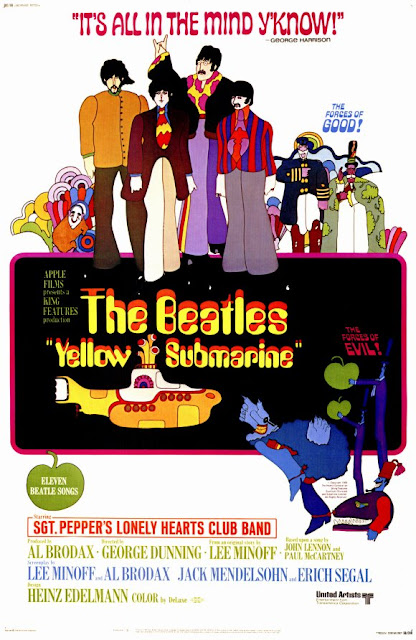 The Monkees still get a bad rap to this day for being non-musician actors playing a plucky young band in the context of a wacky TV show about a plucky young band. The Beatles remain critically acclaimed to this day despite starring in the silly comedic romp Help! and allowing their likenesses to be used in a wacky 1965-67 TV cartoon. By the same stigma, the Monkees' own 1968 psychadelic and surrealist music film Head remains a neglected masterpiece while this tedious snoozer from the same year lingers on in the public mind thanks to the Beatles brand.

The band only approved the production to get out of a contractual obligation of starring in more films, and the fact they weren't any more interested in voicing their avatars for this film than their TV cartoon indicates a reasonable lack of confidence in such a tedious cash-in. Or perhaps they just read the script.

Yellow Submarine is a pompous bore of an animated film, and like all animated films short on imagination this one is enamored of itself simply because animation still costs a ton of money even when the final product isn't very fun to watch. Financial considerations aside, the most generous guess I can make towards the producers creative impetus was that they hoped to capitalize as the flower children equivalent of Fantasia, sanctified from criticism by the music of the Greatest Band of All Time.™

The film plods through all perfunctory stylistic ends with gobs of dime store psychedelia, the biggest countercultural aesthetic cliche then and now, perfect for The Beatles after they went to India and discovered the Sitar. The art direction is rainbow vomit. Color design is more important to animation than live action and the tie-died hippie aesthetic isn't merely using quantity over quality, but quantity over thought. All colors are chosen arbitrarily so long as they're bright and jarring against each other, and your eyes don't know where to focus. This effect has been confused with accomplishment for almost half a century now.

The Beatles as cartoon characters make no impression onscreen whatsoever, their individual personalities somehow even more interchangeable than Devo. The character design is terrible on purpose; producer Al Brodax and director Dunning were concurrently producers of the Beatles TV cartoon which was designed and directed in an appealing style similar to Jay Ward's Rocky & Bullwinkle or George of the Jungle and actually gave the fab four distinct personalities and voices.

All the fun stuff had to go when time came for the airs of a high-art Beatles cartoon - sorry, full-length animated feature film - and just as the color design was made overcomplicated for its own sake each Beatle in Yellow Submarine is drawn awkward, ugly and hard to animate. Their bodies are fat and club footed. Their heads are tiny pins with miniscule facial features whose range of expression barely exceeds a symmetrical smiley face. Their movements have the stiff stodginess of mannequins, or slow motion synchronized swimmers at their most lively.

The incidental human characters fare just as poorly, and the incidental creatures encountered during the eponymous submarine's travels are barely on the level of children's refrigerator drawings, which is perfectly congruent to the emerging cultural movement of amateurism as the purest form of expression - what's sad is to see people who can draw dumbing their skills down to such ends.

The only entertaining characters are the villains, the Blue Meanies - whose big mouths of yellow teeth most likely inspired The Joker's design on the 1990s Batman TV cartoon. Evidently Brodax knew they were the best visual idea, as the supporting nonhuman character "The Nowhere Man" (geddit?) is basically the same squishy ball of fluff with legs, sans big fun mouth. Unfortunately like the humans, they lack solid construction or distinctive physical personalities - while the Meanies are bad guys and the Nowhere Man is friendly, their performances are a lot of identical prancing and mincing about.

The 1970s was essentially animation's nosedive into crap as the medium was stolen from people who could draw by hack TV writers who couldn't make it in lousy live action sitcoms. Yellow Submarine's four writing credits are an early warning to how annoyingly padded with verbosity everything will be in lieu of enjoyable animation, and an omen of times to come. The dialogue isn't terrible, merely too clever by half and never as clever as any random one-liner from A Hard Day's Night, which only required one scribe. There is some poetry to the incessant blather, yet the constant drug-free faux-druggy banter epitomized by the catch phrase (and tagline) "It's all in the mind, y'know?" wear thin fast. Especially when the Beatles impersonators deliver their lines like Jackie Mason on quaaludes.

The biggest problem with Yellow Submarine outside my qualms with the animation is that while the other Beatles films may have been similarly pointless romps, those at least had the Beatles in the flesh. Using their images to string together songs is a precursor to the vapidity of all forthcoming nostalgia acts from Beatlemania to the abysmal Sgt Pepper's Lonely Hearts Club Band film (starring the Bee Gees as the surrogate band) to the recent post-hipster ghastliness of Across The Universe. Beatleless Beatles films are all akin in their cheap patronization of Beatles fans - which is to say, virtually everyone on the planet. At least on the TV Beatles cartoon when, for example, the band sung "Taxman" in a dream sequence amongst medieval peasants and Robin Hood, they didn't belabor the premise for more than seven minutes before the commercial break.

At feature film length, you quickly wish you were listening to an album instead of being distracted by lackluster visuals: Yellow Submarine's version of "When I'm Sixty-Four" shows the Beatles magically growing old white beards, then counting through 64 numbered title cards second by second. Animation is the medium in which literally anything is possible and this was the best they could come up with? No matter how many trippy colors Dunning piles on, he can't compensate for the underwhelming ideas.

The film's best sights are not drawings but the photographic effects employed a la Monty Python using stop-motion cutouts and non-animated lighting effects projected onto backgrounds. The film's second song sequence, "Elanor Rigby," is comprised almost entirely of these photographic effects in a scene depicting England and it's easily the film's best realization of a Beatles song. Unfortunately its gratuitousness also makes one realize that the film you're about to see is nothing but a flimsy excuse to tie one Beatles song to the next and meet the public's never-ending demand for more Beatles product.

The lucrative Beatles brand continues year in, year out to this very minute as Robert Zemeckis, a director who very much likes animation but doesn't know the difference between good use of it and elaborate stylized illustration - is remaking Yellow Submarine with his patented puke inducing live-aciton-motion-capture-animation technique. Thus does the Beatles money machine roll on regardless of their involvement and shall long after Paul really is dead. Beavis and Butt-Head, one of the finest cartoon character duos ever created, once observed that The Beatles ruined music. There's a kernel of truth in this contrarian stab: The Beatles let themselves become cartoon characters that their corporate patrons might exploit them for all times beyond the grave.

Unsurprisingly, the Beatles defeat the Blue Meanies at the end of the film by singing "All You Need Is Love." As anyone off the street could have conceived such a capper, the truth is that all you need is the copyright to reproduce character likenesses.
Posted by Unknown at 4:35 PM