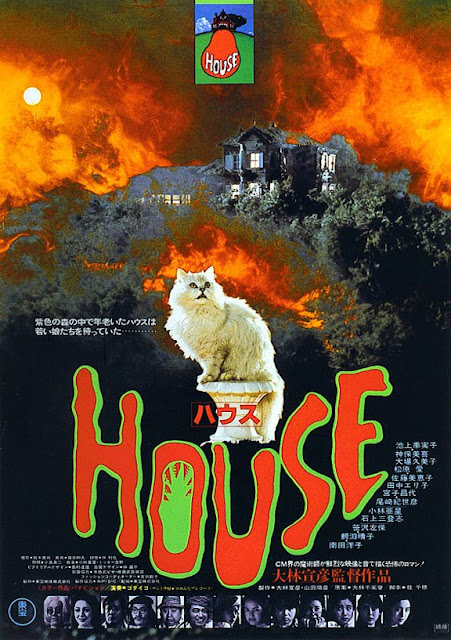 This film begins, via animated titles, with the words "A Movie." That is perhaps the only descriptor of Hausu which doesn't require further elaboration.

Janus Films has recently rescued this landmark cult oddity from obscurity and struck up some beautiful new prints being screened at midnight in theaters across America, spreading a great and terrible schizophrenia amongst human witnesses who can never prepare themselves, like a Lovecraftian object d'art or Monty Python's "Funniest Joke In The World." The film contains both comedy and horror alternately simultaneous or separate with no reason to the pacing of either, as if they are one in the same and the only rule of storytelling is to hold the attention of the audience through giddy discord between the two extremes.

The American conception of Japanese pop culture, especially post-YouTube, has become accustomed to cheerfully deranged sensibilities over the years. Specifically, J-pop culture with schizophrenic mashups of the cute and the psychotic: peppy gameshows with sadistic challenges, bratty children with godlike superpowers, cartoon pocket monsters who induce seizures. Hausu is an early postwar apotheosis of this aesthetic; the Japanese insanity-kitsch, in the form of a haunted house farce. Indeed, one of the more remarkable facts is that the film predates every comparable Japanese or American horror/comedy hybrid from Sam Raimi's Evil Dead (1981) to the films of Takashi Miike and Happiness of the Katakuris (2001) in particular. I sincerely doubt that Sam Raimi saw this film in the three years that preceded his own gonzo spookhouse classic, yet the similarities are unmistakable. Where the cuteness constantly offsets the psychotic nature of Hausu is essentially in the rapid variation of tone from panicked delirium to flippant comic relief, and an ever-changing assortment of analogue special effects not uncommon to Japanese or American children's television in the 70s: stop-motion animation, rear projection, forced perspective, fishing-line puppetry, and blue screens among other tricks. To make the film even more self-enclosed from reality, these effects are employed liberally before the protagonists have even arrived at the house of their doom.

This film is so unpredictably wild that it nearly feels like the next evolutionary step in entertainment for our post-Internet, digitally overstimulated relationship with pop culture, rather than a foreign film from 33 years ago. The true reason it may have gone neglected until now may be that Western civilization's attention span has only just become short enough to view this monster without exploding our brains.

The most helpful piece of information for approaching the barrage is understanding that director Nobuhiko Obayashi began as a director of popular TV commercials full of visual dynamism and Hausu was advertised by name as his first film. In this light, each scene of the film becomes more coherent when taken as an extended commercial with no product at the center. The attention to stylization above all other considerations is immediately apparent from the start. One woman is introduced in slow motion, with gusts of wind running through her beautiful hair as if she's permanently trapped in a shampoo commercial. When our high school girl protagonist and her six friends are introduced, their upbeat mood and carefree innocence feel as heightened as an advertisement for chewing gum. These seven teenage girls, members of a demographic targeted for commercial idealization arguably since the first Seventeen magazine was published in 1944, should be chirping breathlessly about the wonders of some product, yet in absence of any product the girls chirp away about the next plot point. Unlike films whose glibness betrays a lack of caring effort, Obayashi's deliberate weightlessness is an almost Warholian affectation filtered through a Japanese ghost story.

The girls of Hausu are endearingly named for the single character traits which define them, as the girls on a call sheet for a commercial would be credited: "Gorgeous," the central girl whose aunt's house she and her friends will become unwittingly trapped in, is gorgeous. "Fantasy" takes pictures and daydreams, "Prof" is the glasses-wearing designated nerd, "Melody" is a musician, and so forth. Obayashi and his bubbly cast never indulge any self-awareness of their caricatures that might make the film a tedious joke. Their unabashedly blissful happiness continues unwavering until suddenly oscillating to screaming terror, and both modes feel jarringly genuine. In the tradition of nearly all horror story their fates reflect their one-dimensional natures - Melody's death by piano is one memorable set piece of many - yet even in death the girls retain their schoolgirl pep: the analogue special effects never approach realistic violence and after being killed several girls return as ghosts to beckon their horrified friends.

In the excellent academic film book Laughing Screaming, University of Michigan professor William Paul posited that the genres of comedy and horror are really two sides of the same coin. I agree with that analysis especially insofar as a deep belly laugh and a shiver of fear strike me the same way when watching a comedy or horror film; forcefully and unexpectedly. The riddle of Hausu is that unlike horror films with comedy elements or comedy films with horror, Obayashi entirely obliterates the distinction between either genre and lets them exist simultaneously unlike any film I've ever seen. The kaleidoscopic pastiche of special effects, music and art direction is so bizarre as to constantly offset any suspense around the supernatural activity, while the sense of humor at play is so fiendishly outre that you can never relax for anticipation of the next Dadaist sucker punch. The end result is a mondo masterpiece, an improv comedy performance live from a child's nightmare, less a genre film than a dangerously powerful stimulus-response experiment miraculously unearthed from its time capsule to assault the senses of audiences once again.

Like a most improbable fever dream, Hausu must be seen to be believed. Don't pass up the chance if it comes to your town.
Posted by Unknown at 9:16 PM