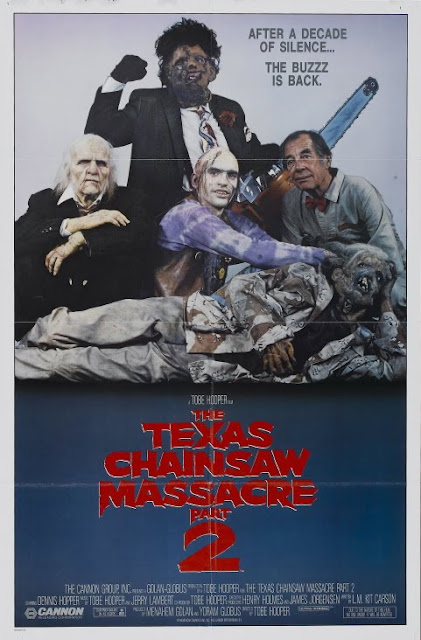 When I was younger I wasn't allowed to watch scary movies. Years away from having my own video store card, I relied on TV and other methods, one being to save allowance money for the videos themselves. One of the movies I wanted to see the most was The Texas Chain Saw Massacre, and at Suncoast Video, a now defunct chain of movie stores for malls which catered to the video store trolls, the VHS cost a whopping $30. At Borders, however, the sequel only cost ten.

The original became my favorite horror movie of all time and The Texas Chainsaw Massacre Part 2 will always hold a place in my heart not from being the more accessible in both senses of the word. I loved horror comedies, and as I realized the film was funny and genuinely creepy instead of grimly shocking. Horror movies and comedies both try to catch us off guard and there are only a few films which juggle both with equal weight. Like so many Tobe Hooper films this one was unfairly chastised in its time and neglected in large measure. Caroline Williams, your Blood-Con 2010 or whatever booth should never see a dull moment.

Hooper made his sequel in the vein of the previous year's successful Re-Animator and Return of the Living Dead, a disturbingly amusing self parody with genuine scares. Hooper being Hooper, the scares are the kind that nestle under your skin and lay eggs to hatch later. Chainsaw 2 was even grosser than Re-Animator and released with the handicap of no MPAA rating thanks to the ubiquitous  Tom Savini. How do you begin to censor a scene of a man staggering around after being flayed of skin when the agonizing entirety is actually integral to the plot? Unlike the Chainsaw sequels to come, this entry was idiosyncratic even in light of the more humorous direction horror films were going, less overtly slapstick (as in the similarly chainsaw-wielding Evil Dead 2) and without the camp of the Nightmare On Elm Street series. Horror fans forsook Hooper as a sellout for the apparent affront to his own gritty classic and they were sorely mistaken.

My best friend Nick understood all this pretty much equally. When you're young enough to still show a movie to one of your peers, which doesn't have the same significance now that film clips are available on a device in your pocket that can access YouTube, you hope they'll take to it as you did. We began quoting co-star Bill Moseley (who conceivably has more screen time than Leatherface) and I knew we were agreed. I couldn't have guessed that at the same time all over the country there were other people gradually discovering TCM 2 (as we called it) including the musician Buckethead who'd begin recording music albums with Moseley in character as "Chop-Top" and the "Cornbugs" and Rob Zombie - who'd introduce Bill to a much wider audience with his roles in House of 1000 Corpses and The Devil's Rejects. Nick and I consumed all his side projects and made my VHS a perennial movie night staple.

Please enjoy our Texas Chainsaw Massacre 2 commentary track with your own copy of the film at home.

If you don't have the special edition DVD, pick it up and find out how horror fans will usually come around in time and give second life to a great movie.

Visit The Devil's Playground, the original online home of Texas Chainsaw 2 and a tip o' the hat to Leatherfacette for posting the original L.M. Kit Carson script.

For a great blog about all things Tobe Hooper, check out The Tobe Hooper Appreciation Society!
Posted by Unknown at 1:21 PM