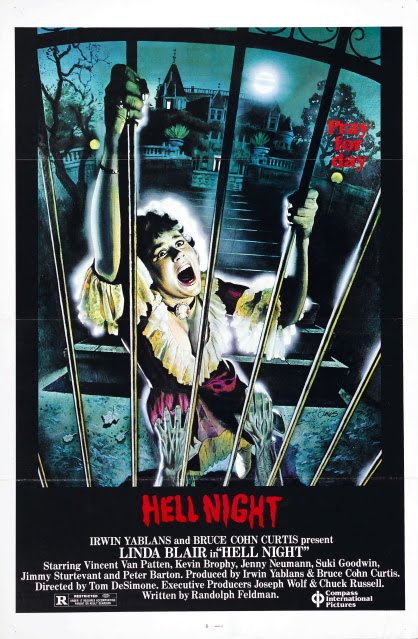 Hell Night was released in the epicenter of the slasher movie craze and is considerably better than most of the competition. Tom DeSimone has a fine eye despite or possibly due to his directorial beginnings in gay porn, pulling off at least a couple genuinely suspenseful sequences and a few that could actually scare someone. The climax featuring Linda Blair as the Final Girl is gripping and some of the body fodder manage to make an impression, namely Peter Barton (whose sculpted face would be squashed in the shower by Jason Voorhees a couple years later) and Vincent Van Patten, who has the most unexpected character arc of any slasher film victim I've ever seen. Theirs and the other kids deaths are creative without being gratuitously gross and the story is well paced around the predicament of being stuck in a spooky old house which they initially ventured to as a fraternity / sorority initiation stunt. Add to this the insensitive portrayal of a deformed killer and you almost have a thematically empty yet competently entertaining version of Tobe Hooper's The Funhouse, minus the genius.

The screenplay was scribed by Randy Feldman, who would go on to write the ludicrously silly buddy action comedy Tango & Cash. While Hell Night doesn't have as many absurdities as that mess, there are still some memorably gaping plot holes made into necessities for the story to move along. Garth Manor, the haunted mansion where the kids are staying, has supposedly been used year in and out for this ritual game of chicken. Why then is this the first time the homicidal hermit who resides there has decided to strike at the intruders? How did he survive there in secret for so long? The real answer is that the film wouldn't be possible otherwise, and in an idiotic way Feldman's illogic is what makes the story unpredictable and scary.

One of the more unnerving ambiguities might have even been deliberate: in an echo of the Vincent Price classic House On Haunted Hill, some of the houseguests scares are rigged by their hosts while others turn out to be actual ghouls. One such scene finds Linda Blair slowly approached by a ghost who may or may not be one of the special effects set up by the fraternity and sorority masters of ceremony. The idea that some college kids could generate a three dimensional apparition is very farfetched, yet the lack of a second appearance in the film by the ghost leaves the possibility open. Hell Night has the dumb luck of benefitting from these non-considerations.

There are three interchangeable persons responsible for the pranks around Garth Manor preceding the real mayhem to come, and they all die before the four lead characters inside realize that the jokes are over  and someone or something is actually alive in the fun - er, haunted house. Linda Blair is established in the opening scenes as tomboyish and ambivalent about staying the night at the manor to join a sorority. Her chaste romance with Peter Barton isn't convincing at all and only serves to justify his being the second-to-last-to-go, which is unnecessary. They're both game actors, but unlike Feldman's lax approach to a logical plot, there's not upside to his bland dialogue or characterizations.

The surprise star turn comes from Vincent Van Patten, who joins Blair and Barton in their overnight dare with some British bimbo he picked up. After tossing off easily the best sexual banter of the film, he manages to escape the mansions tall spiky fence and run through town looking for help while the others are still trapped. Suddenly imbued with desperate heroism, he drops his cocky horndog act and does whatever necessary to save his friends. Thanks to some convenient coincidences from Feldman, he manages to bring a shotgun back to the manor after stealing it from the least guarded police station evidence room in movie history.

Hell Night is a very simple scary story told fairly well. Without the body count or Linda Blair's exciting ultimate chase from the killer, it would scarcely qualify as a slasher. The haunted house setting gives the story a focus usually lacking in the genre and allows DeSimone to continually build atmosphere around the old fashioned locale and differ to spookiness rather than violence. Any casual horror fan will not be disappointed, especially if they watch with the lights out.
Posted by Unknown at 11:30 PM