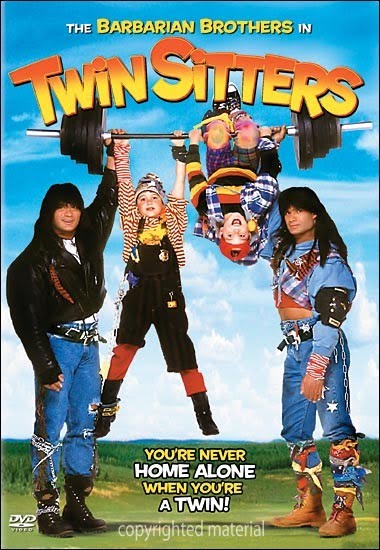 John Paragon was great in his reprisal performance of Jambi the Genie in the recently concluded revival of The Pee-Wee Herman Show in Los Angeles. I'm not sure how he was introduced to Peter and David Paul, alias The Barbarian Brothers. Incredibly he directed them two years prior in another twinsploitation film, the action-comedy Double Trouble, so something must have clicked. Even if they were discovered by Joel Schumacher in D.C. Cab five years earlier, Jambi had enough faith in them as comedians to write the screenplay and Yoram Globus, one half of the legendary trash factory Cannon Films, had enough faith in the Paul twins' video box art appeal to put up the money. This unlikely combination works well for the movie in the sense that every PG-13 kids movie is trying to be just a little dangerous. Hence some icky Pee-Wee type running gags (circa Groundlings era) involving the bratty baby-sat kids faking their suicides, and some scattered eruptions of gratuitous slow-motion Golan-Globus gunfire and explosions.

Paragon has an impressive comedy pedigree and a terrible sense of story structure, the bratty twins whom the Barbarians twinsit don't even show up for almost a half hour. This might have been Globus way of saving money on child actor shooting days, in which case it's not really Paragon's fault. Still, he could have found a better way to introduce the plot than cutting between the Barbarians getting fired from their jobs as waiters, having dinner with their parents, unsuccessfully applying for a restaurant bank loan - and a seemingly unrelated movie involving Jared Martin as a corrupt businessman attempting to come clean to the Feds and being threatened by his evil boss George Lazenby, the Conan O'Brien of James Bond movies. The two threads don't meet until 15 minutes in when by chance the Barbarians are able to save Martin's life from slow-motion assassins, and even then you've got just as much time to wait before the story becomes the Mr Nanny knockoff it's supposed to be.

The supporting cast isn't bad considering they all have to be extremely broad. They're professionals, people you've seen a million times without knowing them like David Wells as the FBI agent working with Martin and Barry Dennen as the snooty butler conspiring with Lazenby. TV's Rena Sofer is the love interest. Yes, for both of them. Even the great Paul Bartel shows up at the beginning, playing his ten millionth snob. Wells has a kind of likable subtle broadness to him, unlike Valentina Vargas as the slutty maid (more PG-13 Cannon fodder) and "Mother Love" as mammy Penny - who also played a sassy black cook in, guess what, Mr Nanny. They're all better than the Barbarians, whose constant scripted jokes about how dumb they are fall twice as flat without reaction shots from anyone, which happens about half the time. They also tend to deliver every single line exactly the same way, Italian hand gestures with a side of muscle beach yo-dude 'tude. Both of them.

A comedy for kids about two freakishly muscular twins should have a lot more physical comedy than this does. There's a few good cartoony gags like when one crushes a basketball in his bare hands, and once they start twin sitting there's some amusing manhandling of Barry Dennen. Tragically there's only one scene where they get to kick some bad guy ass, which is awesome. The problem with comedies starring guys like the Barbarians or Hulk Hogan is that they don't want to just kick ass in a funny way, they want to show their comedic and dramatic ranges which don't exist. The funniest thing about either of them is usually their loud clothing, at least onscreen.

Behind the scenes, the Paul twins wrote and perform some hilariously cheesy power chord crunching rap/rock songs which comprise the soundtrack: At War With The Weights, Shut Up, Watcha Lookin At, I Ride My Harley, Brothers Forever (a ballad) and The Babysitters. Though it's possible these songs are only as long as they're heard during the movie, only the last of these is available in full during the end credits and unfortunately there was no official tie-in soundtrack release. They're far funnier than the stock zany music cues lumped onto the film which make it even less funny. The end credits also reveal the film's totally uninspired original title, The Babysitters, hence the song. The chorus is actually We want the bad bad bad bad babysitters tonight! and Bad Babysitters would've been better but of course Twin Sitters is perfect.

The final fifteen minutes or so achieves an excitement the rest of the film lacks, thanks to the surprise appearance of two more sets of action twins to help rescue the nephews from an oil tanker which, again thanks to Yoram Globus, explodes spectacularly. The action isn't bad either, thanks to a long list of Cannon stuntmen. There's even an impressive moment when the Barbarians grab onto a rising helicopter. Those looking for a laughably ridiculous kids movie could probably find a better one where the stars aren't in on their own unfunny joke. Besides them, Paragon did too many things competently for the rest to be unintentionally funny. This would be a good movie for small children who are really dumb but basically good at heart and want to grow up to be bodybuilders, like the twins themselves.
Posted by Unknown at 11:56 PM