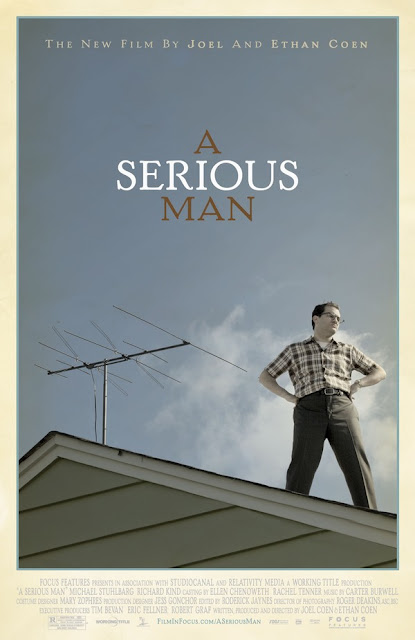 Say, have you heard about the newest film from the world famous Coen brothers? From metropolitan film student jerkbags to Middle American plebes, three decades of cultural landmarks from Raising Arizona to Fargo to No Country For Old Men have made the duo America's most beloved filmmakers whose body of work does not include aliens or dinosaurs. Surely any studio backing one of their projects would be eager to promote their latest potential Oscar winner, and perhaps the executives at Focus Features were ready to until the lights went down in the screening room and the Eastern European shtetl prologue began. Then they realized: this is a Jew movie, and those haven't been fashionable since that other Jew with the dinosaurs.

On some level they may have been right, the fact this film is about being Jewish doesn't mean it's Fiddler On The Roof. After years of creating memorable Jewish characters like the eponymous Barton Fink and he who won't roll on Shabbos, Walter Sobchak, the Coens have finally made a film about Judaism as they see it and their views are uncomfortably identical to the average American Jew today: ambivalent at best. The period 1967 setting may as well take place today, especially during the subplot involving Michael Stuhlbarg's son Aaron Wolff letting pot distract from his Bar Mitzvah preparation. Had pot even reached the suburbs of Minnesota in 1967? The Coens' memory for the era and landscape of their youth is realized with time machine perfection by their go-to cinematographer Roger Deakins and the production design of Jess Gonchor. Maybe they needed to transport themselves for a subject so personal - like their father, Stuhlbarg's Larry Gopnik is is a math professor. Over their whole careers they've oscillated between light comedies to pitch lack comedies or thrillers, and this is their first pitch black comedy to suggest that a series of misfortunes can befall a man in the absence of a loving god rather than the omniscience of an author like Cormac McCarthy.

Stuhlbarg is a pushover Jew bullied daily ever more by some rather ugly stereotypes of pushy Jews. His harpy wife Sari Lennick is leaving him for their patronizingly touchy-feely friend Fred Melamed. His children don't appreciate him and his brother Richard Kind is leeching off him by living on the couch. As these relations grow hilariously cringe-inducing, Stuhlbarg seeks counsel with the local rabbinate and finds no help whatsoever. The ineffectiveness of the rabbinical class to assuage Stuhlbarg's despair is really as anti-religious as the film gets. In a few striking intervals, Stuhlbarg's Jewish identity is reinforced against his will the way most modern unobservant Jews choose voluntarily: through reminders of his social status as an outsider. As the abuse piles on we beg for an explosion of rage, Sobchak style: the whole world has gone crazy, and Larry Gopnik is the only one left who gives a shit about the rules, unlike his cheating wife or the failing student who attempts to bribe him. In a couple other intervals, Larry affirms his faith on his own terms by listening to records of beautiful Cantorial music in private. By the standards of 1967 this certainly doesn't make him close to devout, but in today's age of hedonistic paganism it's a touchingly simple gesture of love for a higher power.

When my most conservative Jewish friend asked me if this film was a positive or negative portrayal of his religion, I wasn't really sure. As the Coens run their protagonist through 105 minutes of personal catastrophe they clearly exhibit respect for his moral integrity no matter how it seems to fail him. They sympathize rather than detach themselves at a satiric distance from the object of their torture, like that famously self-loathing Jew Franz Kafka. While their portrayal of the synagogue as an obsequious and uncaring form of middle management - sometimes pitch perfectly, as in the little lame jokes made during services - is downright hostile, Larry's strength to carry on through his hardships is only made possible by his faith. This is what makes the difference to me between the film being an exercise in cynicism towards those who try to do the right thing and a meditation on the fact that, as it was for Job, doing the right thing is not always rewarded.

The Coens have made a film about being Jewish which celebrates in a mordant way the common point of pride between the most and least observant Jews: survival. I don't think my friend would approve of their agnosticism, but the sincerity of the Coens' questions are unquestionable and profoundly provocative.

Posted by Unknown at 9:48 PM No comments: 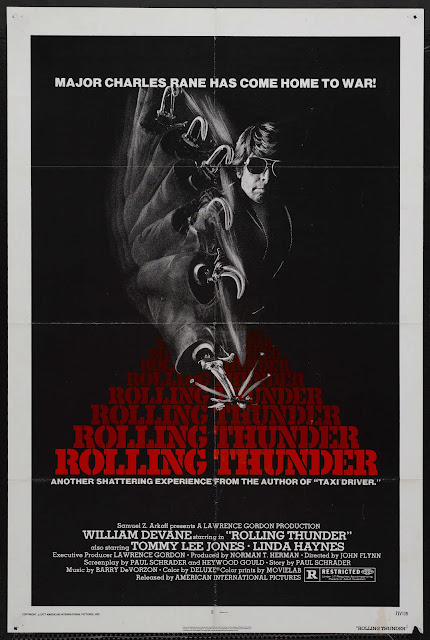 The poster of Rolling Thunder promises "another shattering experience from the author of Taxi Driver and this is simply not true. The only way the experience could be shattering is if you had never seen Taxi Driver, and if you didn't know the same author had written both of them it'd be easier to dismiss this one as a mere rip-off. The story structure is identical; a long character study of mounting alienation culminating in a bloodbath. Unlike the implied past of Travis Bickle's Viet Cong flag hanging in his urban apartment, William Devane's former Vietnam POW status is the explicit catalyst for everything. The two would get along famously, except Bickle might be jealous of Devane's local popularity and success with the ladies.

Devane's Charles Rayne is whom De Niro's Travis Bickle might have been, once, and the story beginning in 1973 suggests that Schraeder developed the story of Rolling Thunder in the process of inventing Taxi Driver. The co-screenplay credit with Heywood Gould (and separate story credit for Schraeder) suggests that the story was sold after Taxi Driver's success suddenly made the world safe for alienated loner action movies. Ironically 20th Century Fox pawned the finished film off to xploitation distributors American International Pictures over concerns of excessive violence, yet John Flynn's camera doesn't have nearly as much blood to wipe off by the end. If Schraeder had waited another ten years before making the sale, or maybe even five, he could have seen his basic story mutilated into yet another generic post-Rambo Veteran-turned-vigilante actioner by Cannon Films or equivalent sleazy studio - way sleazier than AIP.

Paul Schrader has too much respect for his characters to make Rolling Thunder a dumb, fun movie. The deliberate silence of William Devane's Charles Rayne (Rain? Thunder?) relegates him to a reflection of those around him, embodied literally by his mirrored sunglasses which are rarely removed. Late in the story he admits he regards himself as a man who died sometime in Vietnam; returning home as a ghost to an old life no longer familiar or accessible. Upon realizing his wife and child no longer relate to him and will soon abandon him, he reacts with total indifference. The pivotal scene when they're murdered at home before his eyes happens at such a dreamlike pace that I didn't realize until later how he basically lets it happen by not telling the robbers where to find his Veteran's fund money. This may be the only vigilante film in which the vigilante seems to passive-aggressively allow a transformative tragedy to befall him, and it's really creepy in retrospect. He doesn't care about losing his hand, either. In stark opposition to Taxi Driver, whatever thought process driving Devane is kept secret from the poetry of voiceover narration.

Reflected the most in Devane's sunglasses are the obscure Linda Haynes as his would-be girlfriend and a very very young Tommy Lee Jones as his fellow returning POW. Haynes' character is kind of ridiculous, first throwing herself at Devane and then allowing herself to be used repeatedly as bait when he starts tracking down his family's killers. Jones is introduced in the first scene and gives the impression in a few short minutes with his wife that his story would be a lot more interesting to follow. When he reappears at the very end to help Devane enact revenge (at the drop of a hat, humorously) and we get a glimpse of the rest of his home life, the suspicion is confirmed. Schrader has a real knack for the nuances of conservative middle class language even in lesser works like Hardcore; the twangy lines about American and foreign television parts overheard at Jones' dinner table are the most memorable in the whole film.

As John Rambo once said of being a soldier, "you can't turn it off." Rolling Thunder is a film about veterans which respects that, but without empathy. There's zero entertainment value in Devane's methodical revenge, only a kind of perverse sadness. When Tommy Lee Jones decides to tag along in the final act and gets really cavalier about the idea, I realized the absurdity of the Veteran-Vigilante subgenre and felt deep shame as a civilian for projecting my bloodlust onto such a fantasy. Rolling Thunder is, perhaps accidentally, an anti-revenge-movie revenge movie.
Posted by Unknown at 4:24 PM 1 comment: