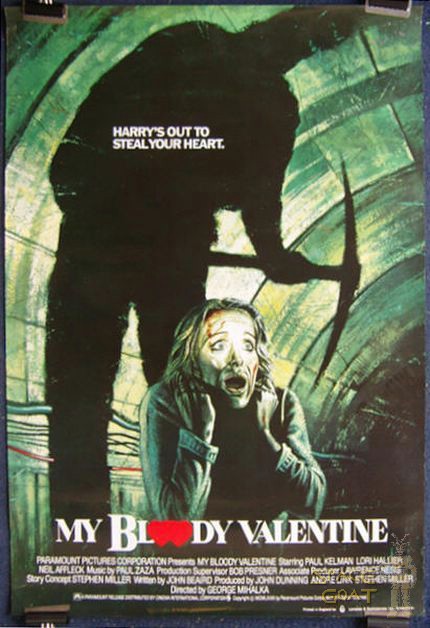 This year's 3D remake of My Bloody Valentine converted me to the 3D horror bandwagon; the gimmick which supposedly will get people back into movie theaters is best suited for trash horror. However, I wasn't expecting the original to be so inferior, even with an infamous nine minutes of additional gore re-inserted on the DVD by Lionsgate to promote the new film. The dip in film stock quality during the restored death scenes is extremely noticeable. Fortunately since the restored moments are the most extreme, this uncensored version takes on a kind of William Castle murdervision gimmick where the screen itself is practically specked with blood / picture artifacting.


Fans of Valentine 81 were forgiving of the dubious restored footage, since this is the type of remastering genre fans wanted on DVD: the restoration of extra sex and violence. Fans of slash trash have had a grudge against Paramount for years for losing all the trims made to the Friday the 13th series, with the sole exception of The Final Chapter's unedited, unused raw footage surfacing on the last DVD release, separate from the film. Those effects being from Tom Savini, they probably came straight from his personal storage vault of lost footage since Paramount obviously prefers the trash can. Ironically the quality of the lost Final Chapter footage is nearly flawless and as long as they included the option to see the original film, Friday fans would have loved to see newly extended death and gore scenes. Some fans on YouTube have already done the job for fun.

My Bloody Valentine fans and slasher fans are one in the same, there's no fidelity to this above all others in the genre as there are for Halloween nor diehard series fans as there are for Friday the 13th who might raise a stink if some new official version were put out that was different from the versions they grew up with. Valentine 81's DVD does give you the option to watch the original film with all MPAA-sanctioned cuts intact, and I wouldn't recommend that. Staying awake during the filler is hard enough.

Filmed during Canada's short lived pro-capitalist Canadian Film Development "Corporation" which gave tax breaks to low budget Canadian and American studios with the incentive to produce more commercially viable films-as-product, as in xploitation. Before the PBS mentality went back to throttling the fun from Canadian film, this period gave David Cronenberg his break in trash as well as spawning a ton of neat genre films. Many of these were slashers and in 1981 they were considered mainstream to the point that Universal was pushing Halloween II and Paramount was not only pushing Friday the 13th Part 2 on the cheap but picking up CFDC slasher ventures like Valentine to release.

Like the founder of Paramount Pictures Adolph Zukor, George Mihalka was a Hungarian immigrant who immigrated to the continent of opportunity. His trash break came in Canadian teen xploitation the previous year with Pick-Up Summer, aka Pinball Summer and this was his sophmore effort. The film's location in the windy Northwest of Nova Scotia in Canada, with cottage style town architecture and unlike slasher convention, layers of clothes on the women (due to the cold) and a neverending abundance of plaid. This all lend the story a certain rural timelessness. At first the main characters seem to be a swath of hammy old Canadian stage actors playing mayors, police chiefs and other authority figures who cover up and panic over the return of an escaped killer while the young folk take the town legend as a joke. Corny as they are, these older guys are a lot more charming - especially radio and tv personality Don Francks - than the young people who get slaughtered.

The young victim players are really hard to pin an age on. The Sydney Mines of Nova Scotia provide them all with a shared occupation and a backstory for the town. They're not teenagers or college co-eds, just young shitkickers whose mining town is so dull that everyone can still get excited for a Valentine's Day dance. Either they're not really that young, or mustachioed young fat guys in Canada look precisely like someone's fat older uncle at Christmas. When the dance gets called off again for the first time since however many years ago when there were murders, all these young miners and their girlfriends have no qualms about moving the party to where they work and sweat and risk asphyxiation for a living during the rest of their week. Why don't they just move and live down there forever? Even away from the auspices of the old codgers warning them that they're all doomed, these couples are extremely chaste. Only the opening credits sequence of the film features lurid nudity from a nameless and quickly offed young girl while the couples in the rest of the movie barely reach second base. Canadians are so well mannered.

Even with all these Northwestern quirks My Bloody Valentine can't distinguish itself in construction from any other slasher named after a holiday turned suddenly murderous except for the idiosyncratic choice of a miner as the killer. Between the opening scene when the naked girl mentioned above gets a pickaxe through the heart-shaped tattoo above her left breast and the scene soon afterwards when Don Francks receives a Valentine's Day poem in a heart-shaped box containing a real heart, writers Stephen Miller and John Beaird

Thanks to, and only, the newly unearthed scenes of major miner carnage, My Bloody Valentine is finally worth a look for fans of the early 80s slasher explosion and the epochal year of 1981. Everything else is rather middling and as much as I appreciate Mihalka's commitment to the gory goods, he couldn't even make the dark tunnels of a mine look scary. 3D may have finally made good on the old canard that the only sensible movies to remake are the bad or mediocre ones, especially those with long dark tunnels and weapons that protrude both ways.