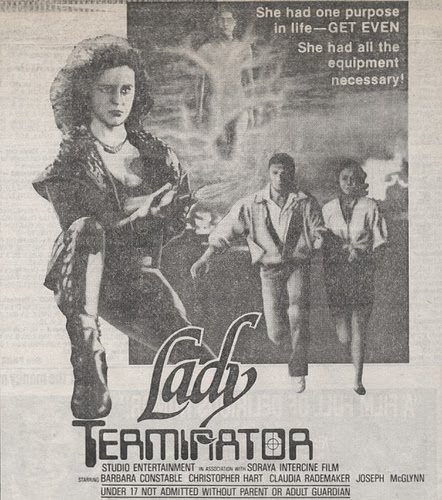 Lady Terminator begins with a sadistic Indonesian South Seas Queen dispatching a serf with her vagina dentata, and surprisingly proceeds to become a very faithful tribute to The Terminator. She comes back hundreds of years later, of course, as the non-robotic Lady Terminator. The filmmakers gambled that the science fiction of The Terminator wasn't the reason it was successful and they're at least half correct.

The South Seas Queen legend actually comes from Indonesia and is the only real Indonesian xploitation movie I know of to be so fortuitously marketed at both Indonesian and American audiences, including the occasional foreign xploitation use of no-name American actors. About half the film seems to have been filmed in English so that the two halves could alternately be dubbed, and I saw the English dubbed version and there's no way English was screenwriter Karr Kruinowz's first language, nor did H. Tjut Djalil know a good dialogue take from a bad one, only briefly marking time between the action scenes. Watching Lady Terminator is like being a kid and listening to another kid describe a movie like the first Terminator: only the good parts, and enthusiastically embellished.

As pure ripoff artists, Djalil and Kruinowz are free to copy only the most memorable scenes and moments from the original while ratcheting up their base appeal. The Terminator who rises naked out of nowhere to begin zeroing in on her assassination target isn't the governor of California, she could be Miss California. Without Cameron's apocalyptic robo-futurism, the South Seas Queen legend prologue makes Lady Terminator unrecognizable as Terminator knockoff at first. When Barbara Anne Constable rises from the South Seas fully naked, knocks off a couple of moron punks and if you've seen the original Terminator you've got your roadmap. Since there's no future to protect, her gun-toting rampage is targeted at a girl whose ancient necklace is magical and presumably enables her to rule the world. They correctly never presume you care.

Essentially the most fun and cheesy aspects of elements of James Cameron's film are all incorporated and enthusiastically one-upped: the nude Terminator walking around is now a beautiful mousse-haired lady and the Kyle Reese part is a cop whose Sarah Conner figure is another young girl. As a product of the times, the 80s-ness of The Terminator has soured into the curdled milk of the late 80s, where everyone's hair is at least as big as Linda Hamilton's in the original, including the men.

Under this thick gauze of free floating action cliches and the South Seas night life of 1988, the story jogs through Terminator greatest hits while amping up the violence: the police station assault scene (in which Lady Terminator doesn't even bother trying to talk her way in before driving a car through the front doors,) the eyeball self repair (which handily looks better than Schwarzenegger's animatronic puppet,) slow-mo Tech-Noir discotheque shootout (the music's worse) and of course the (Lady) Terminator rising from flames all charred and nasty to pursue Kyle and Sarah through a factory. This time she has laser eyes. The script has some forced but appreciated references like "Come with me if you want to live" and whoever did the costumes got perfect matches for Schwarzenegger's punk jacket and Michael Biehn's overcoat!

Lady Terminator is recommended heartily to fans of Asian action and The Terminator who have a sense of humor. If you liked Terminator: Salvation or even those old Dark Horse Comics, this may be way too unserious.