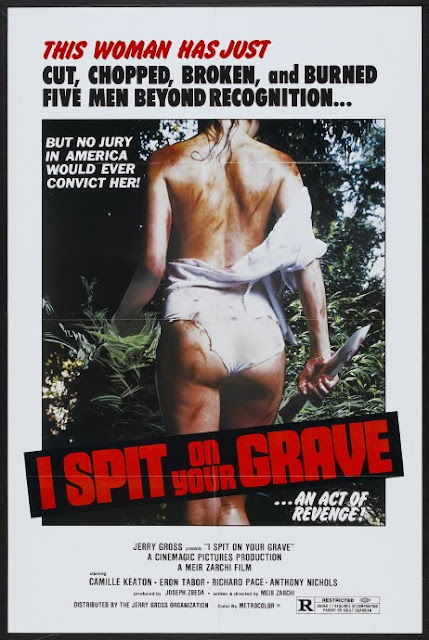 An early target of Siskel & Ebert's pompous national campaign against misogynist slasher movies (this from the guys who rated Evil Dead their "dog of the week") was Meir Zarchi's Day of the Woman, rereleased in 1980 as I Spit On Your Grave. Had Ebert seen the film under the original title he might have gotten a clue that Zarchi was making probably the world's least projectional xploitation film, one in which the story of rape and revenge places viewers almost completely in the victim's point of view. One tagline read More Devestating Than Deliverance! and while Ebert might have conceded there was an artistic statement to be made in a feature length version of that mainstream classic's infamous rape scene, the exact same film becomes misogynistic if the victim (who avenges herself, even) is a woman.

The only American film to create a similar experience of a similar nightmare was Wes Craven's The Last House On The Left (1970). Zarchi's even more miniscule budget denied him the opportunity of finding talented unknowns like Last House's

The most startling lack of polish may be the complete and total absence of music. Initially Zarchi browsed library music tracks but none of them fit the mood he was trying to evoke. Zarchi's usual framing technique is the full body wide shot, as if everything were being filmed by a bystander standing ten feet away. The most artistry he employs is pacing the slow repeated stalking of Camille Keaton, when members of the hillbilly gang descend into frame one by one like gathering birds. The suspense is sometimes unbearable in a way that might not have happened with music score. Zarchi's subsequent career in film has either been one of bad luck, or like Robert Hiltzik merely one of periodic Lovecraftian awakening from darkness for the 1985 action trash Don't Mess With My Sister!. At least he's had good luck with titles. Incredibly, he's slated to executive produce a remake.

Camille Keaton began her acting career in a handful of 70s Italian horror and suspense films including the giallo classic What Have They Done To Solange?. As the granddaughter of Buster Keaton she was acting nobility, and not having known this when I watched Spit her stonefaced vengeance is completely recognizable as the stare of Buster. Zarchi had easy access to his one star; they were married.

The movie finally shows its seams when Keaton begins her revenge, due to Zarchi's weird dialogue and sense of human interaction. English is not his first language and neither Keaton nor her rapist receivers of vengeance seem sure how to handle scenes where Keaton seduces her former captors who thought she was dead. Language is also no explanation for one rapist's abnormally long delayed reaction time to his own castration. Until these moments, all preceding awkwardness at least feels deliberate, as when after barely surviving the assault of Spit's two-act (that would be rape, and revenge) Act One climax she visits a church. Except for a little old lady playing church organ, the place is as empty as if she'd walked into Carnival Of Souls.

I Spit On Your Grave is well deserving of notoriety for how effectively shocking it is to the point of being uncommercial. The male nudity alone has kept it off television forever, and the probable retreat from such realism in the new remake will be sacrilege. Day Of The Woman is more recognizably anti-man than pro-woman but at least sympathetic at all times to the avenging victim: that's the director's own wife, after all.
Posted by Unknown at 8:20 PM

Email ThisBlogThis!Share to TwitterShare to FacebookShare to Pinterest
Labels: 1978, camille keaton, giallo, I spit on your grave, last house on the left, meir zarchi, robert hiltzik, roger ebert, what have they done to solange?, xploitation