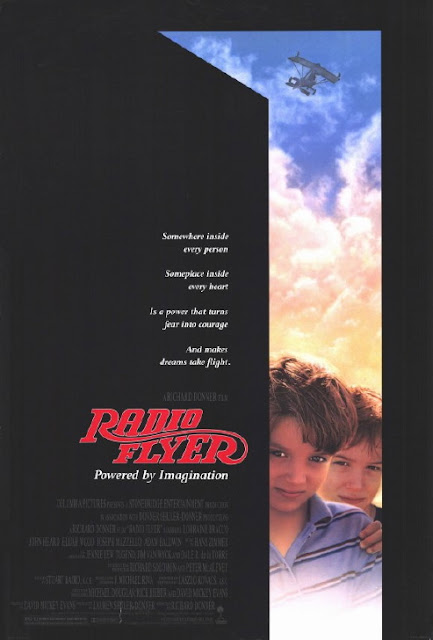 When a movie opens with Tom Hanks, and begins a flashback structure using Tom Hanks narration, my expectations are already very low. Tom Hanks has been sold to us for decades now as the modern Jimmy Stewart, an everyman whose friendly face and lovably earnest persona supposedly make him as at home essentially in any movie, which is exactly the reason he has been groomed as such by studios. He's blandness personified, a mediocre comic who starred in some really unfunny comedies and increasingly precious Oscar bait designed to pull heartstrings. His oeuvre (and mediocrity co-conspirator Ron Howard's for that matter) are what Holden Caulfield railed against when describing movies which condition phonies to cry at the movies but not in real life.

This is the long way to saying that Radio Flyer is the first movie containing Tom Hanks I can stomach which didn't take place during World War II.

Awesomely, screenwriter and unofficial co-director David M. Evans debuted as the writer of the 1987 slasher movie Open House, in which Someone is killing off nubile real estate agents and followed up with a right wing 80s action movie starring Bluto. Then he got out of trash and wrote the 1993 Disney kids baseball team classic The Sandlot and a comfy career directing kidstuff pablum like Beethoven's 3rd and 4th and Ace Ventura JR. Since his middle initial actually is "Mickey" Disney recently let him direct The Sandlot 2 straight to DVD. He's still quite active, and you would be too if your Radio Flyer and Sandlot scripts sold for over a million bucks each.

I'm not sure Radio Flyer is worth a million dollars as a screenplay. Unlike The Sandlot, Evans attempts to dramatize a story about child abuse within the context of a genuinely nostalgic film about childhood which includes special effects assisted dramatizations of dreams and a illogical, metaphorical twist ending. This is a huge order and Evans' depictions of family violence are powerfully suggestive thanks to Donner's direction, who apparently was called in to replace Evans when as a first time director he couldn't handle the more elaborate sequences. The second and more unique accomplishment is the balancing of scenes between the scary side of the childhood recollection story and the happier moments of backyard discovery, invention and imagination.

Ultimately this isn't the feel good romp of The Sandlot where the young protagonist's dad was totally going to kill him if he and the rest of the Little Rascals didn't get the Babe Ruth autographed baseball back from the giant scary dog next door, nope. Young Elijah Wood, he whose eyes were born that size, is worried little Timmy from Jurassic Park Joseph Mazzello is going to get killed quite literally by their alcoholic stepdad. Donner's direction of Adam Baldwin as this nightmare authority figure starts with the old trick of hiding adult's faces in movies about children, later revealing quick glimpses and close-ups for dramatic effect. This is analogous to the role of violence throughout the film, which empathetically startles us as badly as the boys by unexpectedly erupting out of nowhere at first. When Donner lingers with doom upon Baldwin opening up another beer, there's terrible suspense in how bad the damage will be this next time around.

Lorraine Bracco is good. Did she specialize in period moms around this time?

Radio Flyer does so many things well, especially thanks to Donner's mythic widescreen compositions and strong performances by Wood and Mazzello, that I can't really fault the particulars. Some of them are just the cheesiest in the world, like the boys' loyal dog who protects them from neighorhood bullies, but Donner just shrugs and makes it work on a gut level. Even the folksy platitudinous narration by Captain Sincerity works. What's more interesting is how Evans wrote a great screenplay which was filmed into a good movie that is by definition probably too intense for the intended audience. Even if the stepdad didn't frighten kids into seeing something else, why would kids want to watch such a movie for fun? There's nothing on the poster to indicate that Elijah and his brother are playing with their Radio Flyer to escape an abusive home and even if they had, what parent wants that awkward afternoon at the movies? The only parents I can conceive wanting to take the kids are those doing it because it's good for them, or because they suspect their significant other is responsible for those strange marks and are planning after the house lights come up to ask the kids if there's something they want to share. To this effect, the producers end the film with a child abuse hotline(!) Well meaning, but inevitably uncomfortable.

The clean, innocent kiddie humor and wide-eyed wonder of Radio Flyer clearly deign the film for little kids more than anyone, yet only older and wiser children will have the emotional capacity or interest for the drama. While only making a fraction of the budget back at the box office, Donner's approach to the material has endured at least as far as the recent Where The Wild Things Are, of which director Spike Jonze cited this film as an inspiration. Wild Things has been a lot more successful in ostensible kidstuff filmmaking secretly catering to hipster "adults" who are perpetually channeling their inner infant anyways, and who are now finally the perfect audience to go back and get the most enjoyment out of Radio Flyer.