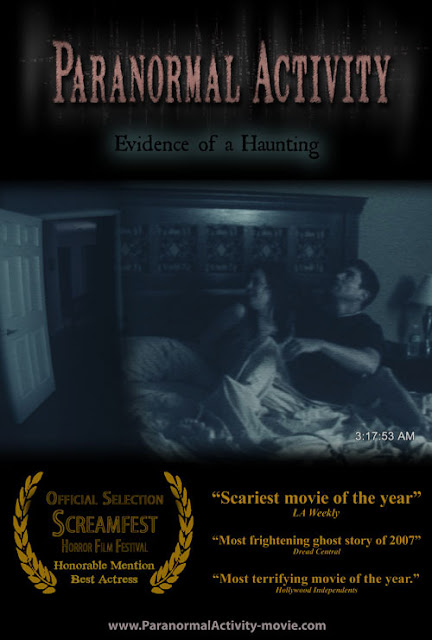 The success of Paranormal Activity is more interesting than the movie itself. At this point a lot of people are going to see what the buzz is about, and I can't imagine there have been a lot of repeat viewings, even from those who had a good time being scared.  The success has trounced Saw VI, which may encourage other studios to pit their horror movies against Lionsgate's franchise in October. Recently Trick R' Treat became a big word-of-mouth video hit (does that even happen anymore?) after Warner Brothers finally decided to dump the long completed film straight to DVD. Why? No stars. No stars? Paranormal Activity doesn't even have a budget and just look. Not only is this the type of success story everyone who's ever even thought about films has wanted for themselves, this is the sort of low budget success the horror genre has more or less owned since George Romero's Night Of The Living Dead. Somehow the common denominator is always a dash or dollop of cinema verite style, through Last House On The Left, Texas Chainsaw, Henry: Portrait Of A Serial Killer all the way up to ten years ago, with The Blair Witch Project.

The really remarkable thing about this film vis-a-vis Blair Witch is that at the time, some people were convinced by the Internet that the hand held camera feature film was real footage and not fabricated. They were also tricked by a Sci-Fi Channel faux documentary; equally incredible to think that just ten years ago the Sci-Fi Channel had cultural influence. More importantly, no one who walked into the movie wanting to be fooled walked out of the movie unconvinced. Paranormal Activity couldn't possibly have advertised a hoax the way Blair Witch did any easier than a Blair Witch copycat could have in the first few years afterward. Since then, Cloverfield was a hit seemingly apropos of the handheld subgenre style (what would the monster look like, people wondered,) George Romero embarrassed himself with Diary Of The Dead (which takes your dad's perspective on the new media age) and a supposedly shot-for-shot remake of the excellent Spanish handicam horror film •REC called Quarantine was ignored by audiences everywhere. There will probably be a slew of handicam horror flicks coming out soon from major studios - some ghost related one did - despite the helpful evidence from recent releases in the same subgenre that the subgenre isn't what people care about. The same glut might've happened after Blair Witch except Artisan cranked out Blair Witch 2: Book Of Shadows so quickly that they killed it themselves. What's happened now as then is a lot of people simply heard their friends say that this movie, in particular, is supposed to be really scary. Well, that and a few people had to see how they used the budget, which is a fraction of even Blair Witch.

The aesthetic works. Katie Featherson and Micah Sloat are convincing enough in their casual scenes and escalating panic scenes, Featherson a bit more so. Their careers probably stand a much better chance in the future than the cast of Blair Witch since people won't feel as though they've been made suckers of afterward. The movie's most iconic image, the one which adorns the posters like the inside of Heather Donahue's nose did for Blair Witch, is also a camera angle. Featherson and Sloat's room is where most of the effective creepiness happens, from the camera's view opposite the wall of the bedroom door and mattress where the couple sleeps. The simple stuff from this innocuous angle works great - rustling sheets, a door that closes by itself - and with each successive night that passes the suspense swells around the silence. Hard to say if seeing this with a crowd and hearing every tenative gasp or shriek at the possibility of the smallest movement improved the experience. The video format would seem better suited for home video viewing, which is where this was nearly dumped, yet I can't imagine Blair Witch being what it was if not for the communal event going on. That's a special effect without a price. The actual special effects used by Paranormal are the most distancing aspect, and mercifully few. The biggest is the final shot of the film, the big chair-jumper, and they would've been better off having that be the only. There's also some stupid low tech special effects which attempt to build creepiness despite phoniness so obvious that the supposed reality of the handicam makes them worse - effects like weird noises or found objects that you'd roll your eyes at in any other horror movie.

The sizzle-to-steak ratio isn't really close with this one. Fans of the genre will be just as happy waiting for home video and non-genre fans aren't going to be converted. If you only see one handicam horror you should still see •REC, which like Paranormal Activity and unlike Quarantine has a sequel in production. •REC nestles comfortably between the showiness of Cloverfield and the shadows of Blair Witch, giving you scary monsters and a convincing hand held style of shooting. Paranormal Activity doesn't show the monsters and considering the beating it gave torture porn's flagship series at the box office, that may be how the average moviegoer wants to be scared again. Here's hoping a lot of little horror movies get their shot thanks to this one.
Posted by Unknown at 5:43 PM

The video caused a terror, but it's a terror out of the terrifying
is not something that really impact cause