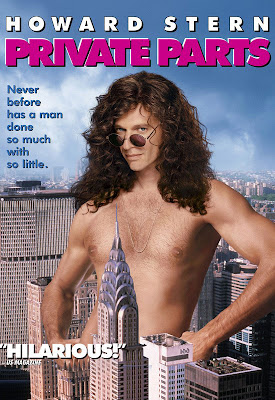 I haven't read Howard Stern's Private Parts. The film version is a mediocre movie and the content strongly suggests that the book is better. The problem is that there are really two movies here, one about Stern's rise to fame and the other about his subsequent battle with censorship. What makes the latter feel so separate isn't the film's fault, even though the forces of censorship are embodied by a single villain, NBC exec Kenny Rushton. Having an important antagonist introduced halfway through is disjointed. To ease the transition, Thomas cast an unknown actor. What she didn't foresee is that actor becoming Paul Giamatti. Watching in 2009, he all but steals the show in Stern's own movie. Movies will always be bigger than radio. This was the largest role Giamatti ever had at the time and while taking another ten years for your breakout role doesn't make you an overnight sensation, this featured part in a hit movie ensured he'd be playing less "FBI Technician" type parts. So if nothing else despite my criticisms, Private Parts gave Giamatti his big break. Playing a Southerner, even. He probably has the third most dialogue after Stern and Mary McCormack as Stern's then-wife Alison. Number one in ugly after Stern and Baba Booey, whose handful of handheld camera man-on-the-street interstitials are basically straight from Stern's TV shows and feel like intrusions from some docu-verite third version of the movie. Most are easy to discredit in the post-Borat age and more reminiscent than anything of 1990s MTV bumpers shot cheaply on the streets of Brooklyn, except this was with a 35mm camera pretending to be a camcorder. Using the gimmick in a movie was new in 1997. The very first shot is of an actress pretending to be an old school teacher of Stern's, disturbed beyond words by his memory. The timing of when Thomas cuts from this fake interviewee's awkward silence to the opening credits and anthemic rock soundtrack is completely modern, obnoxious and stylistically taken for granted amongst the genre of snarky "funny" documentaries I loathe. Fortunately Baba Booey's bits only show up in Stern's Private Parts a few times. As if to acknowledge the fakery, Giamatti shows up during the credits amongst talking heads of real people as his character, recounting Stern's career and the destruction of his own. Never has anyone gone to such artistic lengths to ensure David Merrick's axiom that it's not enough to succeed; others must fail....and in the movie of your life, everyone else must know.

If you can't trust autobiographies with the facts of the author's own life, how to approach a film based on an autobio which actually stars the author? How egomaniacal can you get? At least Audie Murphy had the excuse of being psychotic. Aside from one brief reference to the suspension of disbelief required to see him play his college age self, there's no humorous humility whatsoever even in the Baba Booey bits - no comments about McCormack looking better than Allison in real life. Stuttering John pops up during the credits to claim bullshit that he wasn't in the movie, but so what? Robin Quivers is the only other person to play a younger version of herself, proving she and Howard were made for each other as far as ego. Hollywood movies are usually designed without a shred of self-reflexivity, let alone self-effacement. Stern's brilliance on the radio is cutting through pretensions, and Private Parts is full of them. Especially in the battle against Giamatti and without ever elucidating why the battle is important. Scott Alexander and Larry Karaszewski, screenwriters of Ed Wood and The People Vs Larry Flynt and the lesser Man On The Moon were figuring out how to show the cultural importance of their biographical subjects at the same time this film was co-adapted by Len Blum of Meatballs, Stripes and Heavy Metal. His efforts are comparable in the sense you can practically hear 13 year olds giggling through each scene at the somewhat mild outrageousness like Howard looking at a woman and imagining her breasts inflating with CGI, which is basically a Heavy Metal gag. Worse than being uninterested in what makes him unique, Howard Stern's movie about himself is actually kind of tame compared to Len Blum's classy animal comedy work for Harold Ramis or even an episode of Stern's old TV shows. Troma Films' Lloyd Kaufman recounted in his autobio being stunned at the premiere of Private Parts that the audience would laugh so uproariously at the same lowbrow gags and nudity he was putting in his sex comedies 15 years earlier, which were now in a respectable Hollywood production. That's the compromise on display which ultimately swindles Stern fans: by embracing Paramount Pictures and toning down his act, Stern gets to star in the movie of his life. By embracing Stern, Paramount gets some faux-edgy street cred without releasing anything that'd seriously cause trouble. Much like their release of South Park: Bigger Longer and Uncut two years later, which is actually a far braver film with similar themes of man's right to profanity.

The first half of the film weighs heavily on McCormack as Alison Stern, whom Howard Stern was more hilariously honest about his relationship with on his radio show. That's the whole point of how Howard Stern improvises and lives in the moment when on air (including television); he says what he's afraid to say in real life. Len Blum and co-writer Michael Kalesniko only understand that halfway, they seem to think the greatest thing about Howard's career is perseverance to opposition creatively and in the form of self-appointed guardians of the public mind. That's been an incredibly important part of his career to this day but as a document of the man's life his success if reflected more as popularity than originality. There's a single throwaway line from his wife about how he should talk more like he does in real life when on the air, and even though the results seem overnight they aren't even acknowledged as such. I'm almost positive the book must be great, since Stern also excels on his shows at tearing people apart. It'd be nice to get the juicy dirt on some real names beside the poor movie whipping boy of Paul Giamatti's character.

The two parts in Private Parts I remembered from the TV ads running ad nauseum in 1997 were Stern throwing a frisbee into the head of a mentally handicapped person whom his wife is helping, and AC/DC performing a concert in Stern's honor at the end of the movie. Trailers show the movie the studio wanted, and their pushing two such pandering scenes in the advertising says everything about the homogenization of a unique talent like Stern in the event-comedy formula of the 90s.
Posted by Unknown at 5:47 PM