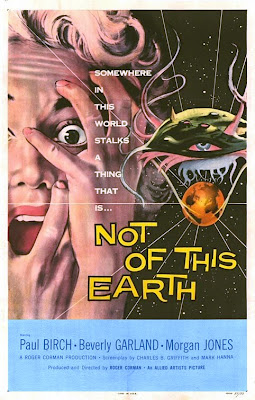 Charles B. Griffith might have been the best screenwriter Roger Corman ever snagged. Before turning Ib Melchior's grim dystopian short story "The Racer" into the camp satire of Death Race 2000, he created two brilliant loose variations on the tale of Sweeney Todd: the unacknowledged A Bucket Of Blood, in which a janitor who turns people into sculptures to impress beatniks, and The Little Shop Of Horrors in which a nerd feeds people to a plant in order to impress a girl. Not Of This Earth, his predecessor to both, features Paul Birch playing a sort of erudite Tor Johnson who is really an alien in disguise. Living in an LA mansion he must obtain human blood to send back to his dying planet and to sustain himself. Unlike Griffith's dry black comedies this is more of a genial straightforward suspense story taking only an occasional grim chuckle at Birch's quasi-vampirism and the methods used to trick people inside his house. While less Faustian than the bumbling antihero protagonists of Bucket and Little Shop, the survival of he and his home planet create some degree of sympathy even as he menaces the human protagonists during the final reel. Heck, he's even memorialized in the final scene, which is where the film's title comes from. Griffith has a wonderfully weird of life and what it takes to get by. I'm guessing co-writer Mark Hanna filled in the cop and doctor exposition while Griffith came up with scenes like Dick Miller, future Bucket Of Blood star and Corman regular, playing a beatnik door-to-door vacuum cleaner salesman who meets his demise in Birch's basement.

Mystery Science Theater 3000 used to feature a lot of Corman's bad movies like It Conquered The World and occasionally they'd feature the plucky bright spot Beverly Garland, whom at least one writer developed a crush on. I understand why. While conservative genre laws of the day dictated that the woman must end up rescued from the arms of the monster, Garland is charming and intelligent as a nurse commissioned by Birch to give him blood transfusions and, of course, not snoop around and find any of his alien apparatus or bloodless bodies. Acerbic and subtle, she makes a great counterpart to both Birch and the dopey small time ex-con he's hired as a houseboy, played by Little Shop's Seymour Krelboin himself, Jonathan Haze. He and Birch have their own comic setpiece at one point where they corral winos into a car, which aside from exemplifying Griffith's twisted sense of humor also illustrates how he allows a seemingly marginal character to emerge naturally as a leading character. Garland has better chemistry with Haze than Morgan Jones, the square jaw cop she's going to marry. He and Haze have a history of run-ins, AND he's friends with the doctor Garland works for. Everyone already knowing everyone is clever time saving device when none too obvious. The reason Garland, Birch and Haze ultimately take center stage from the cliched authority figures is Griffith. The cop fiance and doctor are pretty boring as well. Garland passed away only last year but she was surrounded by stiffs long before that. The only tedious scene in the whole film is waiting for them to rescue her at the end.

The utilitarianism of NOTE's setup - especially when used with outright comedy - allows character and dialogue to take center stage in the service of a story that lasts only a scant hour and ten. This only works if your screenwriter is really good and Griffith has become one of my favorites for this particular trilogy of late 50's Corman cheapies, made with increasingly funny bad taste and creativity with A Bucket Of Blood and culminating in The Little Shop Of Horrors. Corman required stories revolving around a central location where the killer lures his victims, in this case a Los Angeles mansion, so as to knock through production in a few days. His reparatory casting combines perfectly with Griffith's witty dialogue and efficient storytelling. There are a few special effects on the margins, like a flying brain on a string. They're unnecessary. The biggest special effect is really a cost saving device wherein Birch communicates telepathically to save on sound recording. This flick was so efficiently fun that Corman even let his favorite hack Jim Wynorski direct a
Posted by Unknown at 11:18 AM

Email ThisBlogThis!Share to TwitterShare to FacebookShare to Pinterest
Labels: a bucket of blood, beverly garland, charles b. griffith, dick miller, little shop of horrors, not of this earth, roger corman