"Turn it off! TURN IT OFF!!! was a favorite catch phrase of movie riffbot Tom Servo in the halcyon days of Mystery Science Theater 3000 and that made me curious about Hardcore years before I knew who Paul Schrader was. His apparent mania to guiltily document the sordid side of secret sex lives middle class recently reached crescendo with the brilliant Auto Focus (2003) and dates all the way back to 1979 with George C. Scott on a square haircut Midwesterner's classically righteous pursuit to rescue his daughter from the desert den of sin and flesh, Hollywood's porn then-"industry." Schrader's personal Calvinist upbringing which forbade him from movies until college and he grew up observing the town and people of Grand Rapids, filmed here on location in family dining rooms marshmallowed by the coziness of rigidity. If the reactions of George C. Scott are not Schrader's own, he certainly knew guys like that and Scott embodies them perfectly.

The feeling of clinically observing the worst behavior of society that featured heavily in his screenplay for Taxi Driver is here again, yet feels less passionate even in revulsion. This story has been told in the movies before, most tackily and prominently in Joel Schumacher's 8MM (which critically raises the pornographic stakes to death snuff) and Scott's big moments of shock and horror register impact when they should, and he gives the impression of a man about to rip apart everything around him. 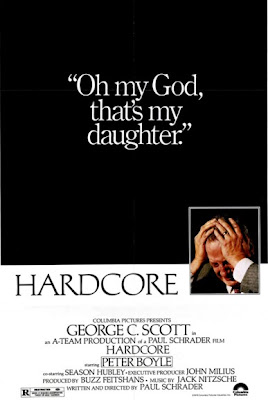 Hardcore wasn't made at the worst possible time to document the porno industry, but close. Porno's skeeviest conditions have already been exploited dramatically so many times in the past 30 years that Schrader's wide eyed wonderment at the offhandedness with which sex can be documented is severely dated. His screenplay does not have else to offer in color or plotting, either. Peter Boyle fails to register as the PI who investigates for Scott. When Scott finally finds her and emotions should climax...Well, Scott was reported to have fought with Schrader during filming and it's not just his character who wants the scene to be over with so he can go home.
Posted by Unknown at 9:18 PM