Harry Nilsson is damn good and damned forgotten. From nearly the last generation of old fashioned self employed American/a singer/songwriters during the 70s, Nilsson also had a prolific film career beginning with Everybody's Talkin' from Midnight Cowboy in '69 and ending rather permanently with his death in 1994. Meanwhile Randy Newman was turning his attentions to film entirely after firing on both cylinders between film, 80s pop and the same magical 70s brand of wry, lyrical and skillfully polished tune-grinding. Between them and Paul Williams, a pattern of magical elfishness emerges.

The Point was originally Nilsson's 1970 foray into the lovely rock opera rash catching on since the previous year with Tommy by The Who. The album tracks are "Chapter" one through eight and narrated by Nilsson as a fable. In the land of pointy headed people and things, Oblio is born with a round head and must wear a pointy cap to at least attempt fitting in. His only friend is his dog Arrow. One day they are banished to the "forrest of pointlessness," only to discover that everything has "a point" after all - pointed philosophical metaphors ensue. Nilsson's narration is what tells the story, and his songs are merely reflective. "Me and My Arrow," the radio play hit, is simply a four verse melody as opposed to a musical with medleys of characters.

Unfortunately The Point (1971) the animated tv movie has a script. This would not be a problem were the film live action. By 1971 traditional American animation was pretty much beyond modest improvement for the next 16 years before Ralph Bakshi and John Kricfalusi's Mighty Mouse and Ren & Stimpy made the uptick of the 1990s possible by sheer shameless imitation. 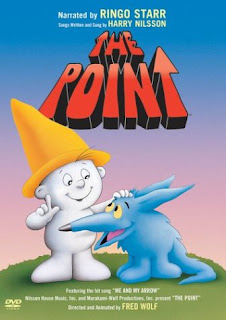 Consequently Oblio goes from the shapeless pastel imitation of The Beatles' Yellow Submarine into this Ziggy-looking fleck smattering of sickening wholesomeness. Dig the dog. Everything looks this ugly and the acting is nothing but generic poses.

The dialogue is all unfunny filler, as dialogue from "writers" who stole the medium with zero talent would now do in all television animation. The Point has all the awful trends of animated features to come, except this one is made even moree (in)offensively cute by the new yuppie cowardice and self-righteous need to condescend to children. They must have hated them and now we have "cartoons" by cartoon "writers" like Adult Swim, grown up children with consequently stunted imaginations.

A decent animated film would've been the length of the album and half the length of the movie, which saccharinely pads itself with talkiness. The guy who wrote the script went on to do exactly nothing and the director Fred Wolf became a successful peddler of bad ugly faux-cute cartoons all through the 70s and 80s like Strawberry Shortcake and junk with marquee value like James Bond Jr.

Oblio became Sprout, the fruit of The Jolly Green Giant's loins, who is a vegetable.

For a Nilsson musical with balls for the whole family, watch Popeye in its new widescreen dvd.
Posted by Unknown at 9:04 PM