The last post in this series, I threw down the gauntlet that Heath Ledger as the Joker might warrant further comment. He does, mainly to prove that for all the discussion of Batman as a "realistic" and serious character, the batnerd establishment is not clamoring for the next absurdly expository story about Christian Bale's Bruce Wayne. All the hype has still been about the Joker.

As an aside, let me point something out: no one cares about these movies now but the nerd establishments, and we are all nerds now. CGI fantasy films are the only films that make MONEY, and since it's infantile material to begin with and the whole family can go, they do extremely well. Cartoonist Peter Bagge illustrated the point beautifully in this Reason Magazine cartoon

The first 7 minutes of what they used to call the first reel in days when this material was relegated to the drive-in is online now. As is the official trailer.

David Goyer's stiff and lame dialogue aside, wasn't it a far more influential time for Hollywood when Michael Keaton and Jack Nicholson were cast? Their casting was mainstream movie news, as opposed to today, when Christian Bale and Heath Ledger are supposed to seamlessly blend into their hermetic, nerd genuflecting world.

These are the most generic performances and dialogue imaginable. It's tailor made for an undiscriminating fan base who demand reverence to an ideal portrayal that's constantly changing. If any ac-TOR were to stand out too much, it would offend their delicate sensibilities. Hence the revisionist complaint that Jack Nicholson was too much like Jack Nicholson, and not The Joker.

The Joker is a FICTIONAL CHARACTER.

Get a load of that dialogue, too:

"Obviously we don't want you doin' anything with your hands, other than hanging on for dear life!"

"I guess The Joker's as crazy as they say!"


..............You know, when cornball dialogue happens in a totally artificial fantasy world, it's one thing. But when it happens in a pseudo-realistic world, that's creative self-sabotage on a deep and abiding level.

Who'd have thought THIS exchange:

"'Cause I bought it in Japan"

...Would come off as deft compared to the non-exchanges of Goyer (and judging from those first 7 minutes, the brothers Nolan) who makes every character say exactly what they're thinking and doing at all moments, like overlong cartoon dialogue balloons?

Who'd have thought Sam Hamm and Warren Skarren were Herman Mankiewicz and Preston Sturges by comparison?

The fact Hollywood matters less to the rest of American pop culture now as it's own entity gives pause as to why all it's most profitable ventures are recycled material from books (Lord Of The Rings, comic book movies) and children's movies, in that order. Original material is at an all-time sparseness point, since the other half of Hollywood movies now are remakes, the death of a thousand cuts for lifelong movie fans.

Keaton and Nicholson had resonance in Burton's hands for the reason he cast them to utilize their abilities as actors. Nicholson as the Joker was a straightforwardly logic casting choice of a longtime genuine talent. Keaton was Burton's choice because Michael Keaton "has that fucked-up look" (Burton) and is a great physical performer as evidenced by Beetlejuice. He and Christian Bale's approaches and 180 degrees apart. Keaton's performance is almost that of a silent film actor's whereas Christian Bale and Heath Ledger are possibly going to be growling at each other through the whole stupid thing with a lot of contrived dark-and-heavy dialogue. 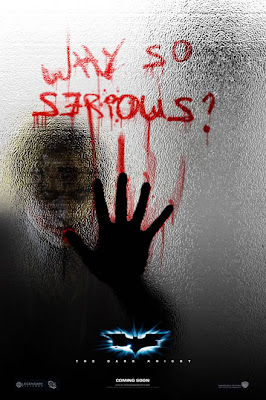 Wow, I bet you feel like a jackass, huh?