The most well-rounded zombie film, in terms of scares, action, profundity and visceral visual beauty is probably George Romero's Dawn of the Dead. The most critically misunderstood, but increasingly rediscovered and bleakly touching zombie film is probably Romero's Day of the Dead. But the zombie film which beat the pants off of Day with audiences that same year and essentially redefined zombie horror to this very day was Dan O'Bannon's Return of the Living Dead, arguably the most entertaining zombie film and ranking second only to Dawn.

O'Bannon brought limber speed and brain-eating to zombies, as well as speech - it's telling that Romero's trilogy-closer Day contains a speaking zombie as well. To the horror genre itself, O'Bannon brought irreverent post-modern humor (the characters have seen Night of the Living Dead) long before Scream and not at the expense of the story's integrity. He used splatter slapstick in ways that only The Toxic Avenger was also attempting at the time, and without the benefit of overt camp. This is one of the greatest horror movies ever made, one of the greatest horror-comedies ever made, and one of the greatest movies of the 1980s.

Next Saturday I'll be seeing it at the Aero Theater in Santa Monica, making it the third time I'll have had the privilege of the theatrical experience. Previously I've gone to screenings in New York and Toronto. Sharing the enjoyment with an audience is delightful, as there are really only two ways to feel as though you're seeing a beloved film for the first time: with others who have not, thus enabling you to feel their first time exposure by osmosis and remind yourself what that was like, and secondly, under the influence of narcotics which fog your brain well enough not to remember what happens next. There's nothing like your first time, but both of those will have to do.

In Return's case there is now an additional incentive to see the theatrical print. Both releases of the film on DVD since 2003 have had sound editing work, basically uncrucial to the experience but important for any fan who's had such details memorized since the first 20 viewings of their worn-out VHS rental copy. Oddly these edits have been made by O'Bannon himself, and I'm sorry to say, though they may have been what he initially wanted I don't think they improve the film in the least. Call it the George Lucas syndrome, though O'Bannon possesses more talent in one hair of his Southern fried beard: 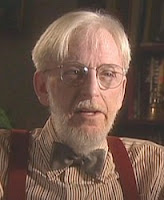 Out of chronological order, and spoilers ahoy, the first group of changes had to do zombie voices. These are the talking zombies who made talking zombies famous, and their voices were all suitably weird. Unfortunately, the first talking zombie we see got his voice modulated several octaves lower than it originally was. Dig the original:

Not as much personality, huh? I guess O'Bannon thinks the lower octaves are scarier, but the "tar man" was plenty scary and funny as he was, and that voice was part of his character. The same change is made to this zombie and his famous line later on:

The original voice had a bit of Jersey accent, which is weird for a Civil War zombie. On every worn-out VHS I'd ever seen, you couldn't even notice the uniform! Appartently the Civil War zombie angle was meant to be more a part of the film - it takes place in Louisville, Kentucky - but it exists only in this shot and an old cannon seen in the "Resurrection Cemetery."

Then there's matters concerning the film's kickass West Coast punk soundtrack. Despite the enduring popularity and lasting appeal of the tunes mixed into key moments throughout the story, O'Bannon has never really expressed much an interest in this aspect of Return over the years. The bands chosen seem to have simply been what was available at the time, despite their high quality, and their inclusion may have been done mainly in tandum with the punk teenager characters than what O'Bannon felt was essential to the overall aesthetic.

In the first edit, O'Bannon moved the start of "Take a Walk" by The Tall Boys to the last seconds of this scene pictured above, which like so many others contains Howard Hawksian framing and many actors talking rapidly over each other. According to Dan's commentary on the 2003 DVD, he wanted to hear what they were saying. They're screaming about a zombie on the other side of the door, in full panic, and I think having punk music playing during this emphasises the dischord. You can still make out the gist of their dialogue, which isn't essential to the story. In the subsequent shot, the group is running from this building to the nearby cemetery, and it's at this point in the song that the soundtrack sings, all you gotta do is, GO! GO! GOOOoooo... Which is a sublime detail and one not unnoticed by other fans.

Finally and most egregious of all changes is the removal of psychobilly grandpappy Roky Erikson's "Burn The Flames" during a climactic scene in which James Karen cremates himself rather than become a zombie, even though he's a good Catholic:

O'Bannon's rationale here was that he wanted to hear Karen's death scream, but once again, you could totally hear it even with the song originally pumped in - it's a death scream, for goodness' sakes! You only hear a couple seconds of the song in the DVD versions, and it's pointless.

During all these scenes, I can only soak up the precious seconds of authenticity during the next screening, before all the remaining prints crumble into dust...if you live within 100 miles of Santa Monica, getcher ass down to the Aero this Saturday!

Also, a warning on the most recent dvd. While the anamorphic transfer looks good and a new doc has been added to the features of the 2003 dvd, the new cast commentary has the HORRIBLE hinderance about 3/4 through the running time when MGM DVD decided it was necessary to have a couple of jackass interns or PAs or parking attendents or something to come into the audio recording booth and pretend to be zombies. This consists of making shitty jokes and interrupting the actors who were actually in the movie. Eventually they leave while there's still a few minutes of movie left, but I have NEVER seen or heard such a retarded thing on any DVD.

The new cast commentary is really good otherwise, too. Who knew Beverley Randolph was basically the same as her character, Tina? I actually wanted to complain to MGM but can't find any email at their website, only a way to join their mailing list. If I could, I'd tell them to fire whosever moron idea that was and never, ever do anything like that again.
Posted by Unknown at 7:28 PM

Email ThisBlogThis!Share to TwitterShare to FacebookShare to Pinterest
Labels: return of the living dead