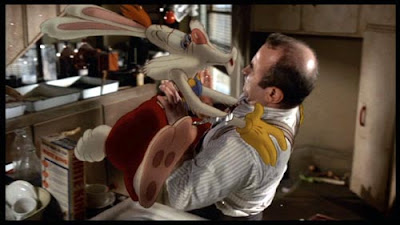 Part 1 of a series

Film criticism of animation is abysmal. The state of live action film industry is nowhere near as bad as the animated brother. Animation was born within decades of live action film, which is not much in the moving pictures medium's lifespan: about 127 years before this day, counting the earliest experiments like the photos taken of horses to win a bet. What animation and live action have in common is being stored completely still as visual electronic data or chemical exposure. By disc, cassette or machine with light bulb, the visuals are expanded in size and set forward in motion and projected, to be seen. Sound recording exists in the same formats, and a sounds may be added to picture using the same technology.

For both animation and live-action, this is merely the final step. Aside from one stage of visual form, the similarities between the two begin at post-production and are so entirely different that sloppy comparisons of quality between the two are a dead giveaway the critic knows little about either. They are two separate mediums. The atrophied state of American animation - it's birthplace and most influential industrial laboratory - is even worse than modern Hollywood's mismanagement and the foibles of its alternatives even before the internet was a factor.

The gradual retardation of the medium in the United States began sometime after the end of World War II and before the 60s were over. The animation production process created by pioneering animators was reshaped by bureaucratic corporate decision, and has long suffered a decline of quality in turn. The glory days of Disney and Warner Brothers were replaced with a compartmentalized factory model of assembly antithetical to the expression of talent and skill.

Once the components of animation were as cohesive as any high point of filmmaking. Skilled teams of brilliant dozens working as a unit under the stewardship of a director created pioneering works like the Looney Tunes which spanned the 1930s to the 1950s. This was replaced by a system which separated the components as far away as possible, even outsourcing to other factories around the world on single production.

Men like Tex Avery, Chuck Jones and Bob Clampett weren't just guys who could draw well, though that already ranks them ahead of Seth "Family Guy" McFarlane. They were DIRECTORS, as important to their medium as Fritz Lang, Alfred Hitchcock or D.W. Griffith were at the time. Like them, their work holds up as brilliant to the present day. Disney and Hanna-Barberra's great animators remained even more obscure than the relative acclaim given to Chuck Jones over the years, because those studios stressed artist anonymity and a regimented creative process from the very beginning.

In time, the great directors of animation retired and instead of new, comparable talent, their replacement came in the form of "factory model" animation and what that model of production created between the 1960s and late 1980s. This not evidence of progress. It is evidence of the art form being trivialized, cheapened, deadened and until very recently, critically discarded. Disney's assembly line model became the standard, only minus standards of competence and the desire for innovation.

When Hanna-Barberra came to dominate television animation they would do the same on a lower budget. Though their early output had appealing design (ie, The Flintstones), this was due to artistic talent held over from the classic era and fading away fast. Soon they could only cannibalize their own past, endlessly updated "new" or "junior" versions of classic characters with "edginess" and "attitude" as Disney and Warners would.

Neither company had coporate leadership interested in competition for the delight of their audiences. They were simply the only prominent American animation houses around, and the only new product available, so they focused on pumping out subpar product for undiscriminating children. Classic animation on tv was limited to censored appearances in between blocks of programming intended to sell toys. Today it's completely gone.

1) The idea of having a director, as any live action film would have, was scrapped, and

2) The "factory" model of animation production replaced small teams of animators with assembly lines, and

3) The "factory" model replaced animators with writers as originators of content. What this means is a bit tricky and I'll elaborate on it a lot in the next post.

For fans of animation created in what can loosely be called the "classic" form of production, a spark of hope was kept alive in the 1970s by renegade director/animator Ralph Bakshi. With Canadian director/animator John Kricfalusi as his protege he developed the landmark Mighty Mouse: The New Adventures in 1987. Co-inciding with The Simpsons, Kricfalusi created Ren & Stimpy. Together they brought the director/unit model back and resuscitation of American animation. Spongebob Squarepants, Beavis and Butt-Head, Adult Swim - all can be traced back to that pivotal challenging and partial reformation of industry standards which staved off the erosion slightly longer.

This public and critical rediscovery has been extremely recent. For most people it began with two films created in the wake of Bakshi and Kricfalusi's 1987 reformation, Who Framed Roger Rabbit? (1988) and The Little Mermaid (1989). On television, Tiny Toon Adventures (1990) and The Simpsons (1989) re-invigorated interest in television animation. With the exception of Roger Rabbit, all these landmarks came at the cost of quality animation and design. All indicated a schism between the public perception of animation and it's actual unique capabilities (though Roger Rabbit has the excuse of primarily being a live action film.)

The average North American, paid critic or casual movie-goer, can guess at each step of the movie-making process far more accurately than the combination of cells and ink that precedes animation. This does not guarantee a wiser evaluation of live action films, but you don't need to know the different types of camera lens to be bored by a lazily or ineptly made movie. We have reached the point in the history of animation when standards disappeared utterly, and people were not even willing to draw distinctions between good and bad animation. We are past that point, thank god, but are at only a slightly worse plateau in which "animated" television shows and films are made popular for any reasons BUT the animation itself. Yes, this includes CGI and the Pixar films.

We cannot continue to delude ourselves that the margin of difference between animation of today and yesterday is negligable, or represents "progress" in the form of CGI, or simply displays differences in taste and style of entertainment between generations of audiences. A near-total loss of standards has occurred.

So what is the criteria by which animation can be judged? Can it be applied and understood by audiences of non-animators? Of course it can, and until standards are re-introducted to the animation industry itself it is incumbent upon historians and critics of FILM to help bring them back into use. We first need to remind ourselves of what joys audiences of animation in the first half of the 20th century took for granted, and how their creation was so diametrically different than what we are unquestioningly accustomed to today.

Email ThisBlogThis!Share to TwitterShare to FacebookShare to Pinterest
Labels: animation