Here we go - I darkened the scans a bit to improve legibility, hope it helps. 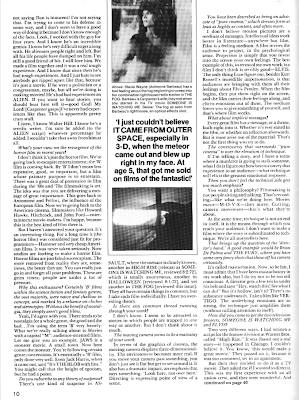 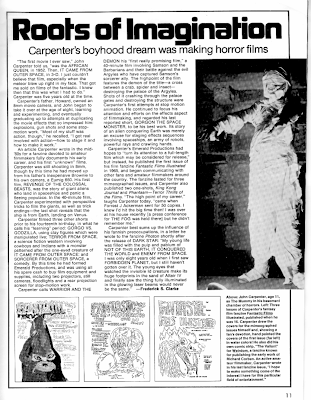 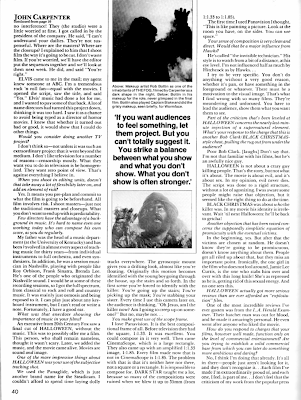 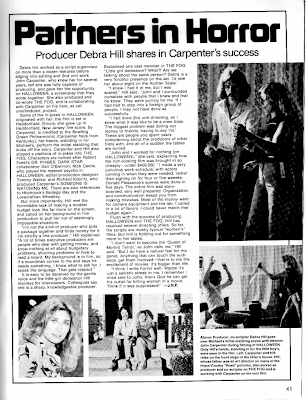 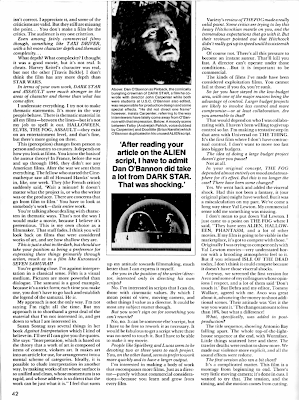 There are some excellent passages regarding film-as-art vs film-as-entertainment. I particularly like this one on page 10:

"There was great deal of pretension in film during the '60s and '70: filmmaking is art. The idea was that you are delivering a message of great importance. This goes back to Antonioni and Fellini, the influence of the European film. Now we're going back to the American cinema, filmmakers like Howard Hawks, Hitchcock, and John Ford - entertainment movie-makers. I'm happy, because this is the best kind of film there is."

And how terribly cruel that a man who so well understood and respected the necessity of commercial interests as a filmmaker would be denied the full resources of Hollywood for the rest of his career when The Thing had the misfortune to be released after E.T. and Big Trouble In Little China released before East-meets-West action genre hit its stride with stuff like Rush Hour. The fact that both are now regarded as genre classics should confirm that for all his dedication to genre he was simply too much ahead of his time, too much of the time.

Even a work perceived as minor and/or frivolous, like They Live (which still ellicits only trivializing and simplistic comparisons to Invasion of the Body Snatchers) was extremely prescient of trends to emerge in sci-fi films like The Matrix: vast technological alien conspiracy, the metaphysical theme of "sleep" and humans as unwitting slaves, and alien "agents" in human form among us were all concepts employed by the Wachowskis ten years later.

At least from 1978-81 the man's films were alligned perfectly with the pulse of America...note his plans on the last page for "a real nifty one called Escape From New York City," which is his masterwork.

Yes, it's the martyrdom of the initials JC...both were carpenters, after all.
Posted by Unknown at 11:34 AM

Great article, and many thanks for putting it up.

But, are there some pages missing? That quote you referenced doesn't seem to appear, and usually cinefantasique ends with a little box in the corner. Nothing of the short is revealed here.

Whoops, spoke too soon about the quote.

Still not sure if the interview is done on page 42(the little box comment stands).