Batman is the only comic book superhero I really care about, and aside from Spider-Man and Superman he's the only one to have had some good live action movies. Tim Burton's two entries in the franchise simultaneously enthralled and horrified me as a child, to my eternal gratitude. I despise Batman Begins as a lumbering, ponderous church service for passionless geeks, one of the worst examples of superhero nerddom which thrills no-one. In a mounting wave of reactionary resentment against Joel Schumacher's amusing but frivolous Batman Forever and gratingly frivolous Batman and Robin these nerds demanded and eventually received a new film version of Batman and his colorful world completely drained of color, fantasy or fun. The public was informed by studio press materials and the uncritical parroting of these materials that the latest incarnation would be a return to fundamentals the likes of which we'd never seen on screen - not only undoing the camp damage of Schumacher but the supposed frivolity of Burton as well.

Whereas Batman and Batman Returns had been increasingly well regarded over time, slowly the tide began to shift when Warner Brothers had to kowtow to an increasingly vocal strain of superhero nerd elitists who had convinced Hollywood that they were responsible for the financial successes of more and more superhero movies and franchises in the 2000s, beginning with 2000's X-Men. Here was a movie that self-consciously declared emancipation from the oh-so-dreadful comic-bookyness of comic book movies past ("What did you expect, yellow spandex?") and was helmed by a respectable and acclaimed director (Brian Singer, who made his rep with The Usual Suspects) of which hadn't really been assigned since Burton for Batman and Richard Donner for Superman. Two years later Sam Raimi attained the mainstream success he'd been seeking throughout the 90s with Spider-Man and suddenly the superhero genre was the place to be. Name directors and actors have been flocking to it ever since.

The ugly rub it's taken on our beloved Batman has resulted from typically dumb Hollywood copycat theory on the most superficial elements of those two trendsetters. From X-Men we have the need to neuter costumed flamboyance - hence the uniformity of both hero and villain costumes - and from both films we have the trademark Marvel Comics focus on interpersonal drama as an emotional anchor and sometimes counter-effect to the fantastic. This works for both films, and the main reason is that Marvel characters' fantastic powers are far more limited than their DC predecessors - guys like Superman and Green Latern are so omnipotent as to have basically arbitrary abilites which are revised every few years. Guys like Wolverine or The Incredible Hulk have been popular without major revisions to their abilities every few years. So for Hollywood marketing committee-types feeling more beholden to the hardcore fan lobbies than ever, the following conclusions were reached about the base - ie, the people who'd see the first film in the would-be franchises no matter what:

1) Fan audiences want their superhero adventures to bear fidelity to the source material, at least as it currently stands

Noble sentiments, to be sure. On that second point, what makes Raimi's Spider-Man better than Singer's X-Men is what makes Spidey a better character, period - for all the relatable trouble in Peter Parker's life, there is joy in his friends and loved ones. For all the burden of being Spider-Man, there is joy in swinging through the skyscrapers of New York. Compare this to the X-Men, in which multitudes of characters are burdened not only by exile from normal society but the perpetual threat of civil and racial war hanging over their heads. If compromise were possible it would mean the end of the story.

DC characters, however, came before Marvel characters and thus were never intended to be identified with except in the abstract. Jungian, not Freudian. Archetypes, not personalities.

Though I appreciate Richard Donner's Superman movies, I'm not a fan of the character and haven't made seeing Superman Returns a priority. It's now become a non-priority. The tepid reception across the board seems to have a recurring complaint that Superman himself is frequently too depressed too melancholy, his behavior bordering on bipolar. The obvious lack of new villains and situations was discouraging to a non-commited casual moviegoer like myself (Lex Luthor again? Seriously?) and the only promises thrown out to draw in non-fanatics were that we'd get a more in-depth and layered portrayal of the character, from none other than Mr Singer, and that hey - it's a new Superman movie! It certainly has been a while since the last one, hasn't it? You even had a "name" actor in the Luthor part, like in '78 - first Hackman, now Spacey. And yet audiences called bullshit because Superman himself isn't supposed to be humanized to the degree they attempted.

He likes being the literal ubermensch. He's not even technically HUMAN for god's sake! Not every superhero is Tobey McGuire!! But that's the Hollywood copycat mentality.

These were the exact same promises offered to casual fans or potentially non-interested parties of another Batman film. Having actually seen that one I can attest it falls flat on it's face just as badly as the critical and not-so-critical-fan reception of Superman Returns. This is simply the wrong approach to both characters, and yet Batman Begins has been lauded not only as a triumph but the first successful Batman film to date.

The self-described superhero "fanboys" are trapped in a losing battle of their own devising. These superhero movies are the public face of their obsession, the legitimizing form which elevates their perpetual adolescence into something less embarrassing. The Superman and Batman movies helped, but as the genre goes through it's second cycle on the big screen, the desire for further respectability grows stronger. Though the fanboys believe they are guiding the creative development process due to their 18-hour life cycles on the internet, endlessly signing petitions and "making their voices heard," it's quite the opposite. The studios play them like a fiddle by hiring moderately talented or expensive talent for their big-name franchises and thus putting up the airs that they're being properly respectful to the legend - does it ever occur to these guys that the studios might be putting popular names in the marquee because that's what sells movie tickets to the rest of the population who doesn't think of Thursday as "new arrivals" day at The Android's Dungeon Comics & Collectibles II?

Talented as they may be, Singer and Raimi were not exactly expensive hires for big studios, they mainly wanted to do the material because they were fans. When a second-tier property like Daredevil is arranged for the movies, we see a no name hack director and a cast of mass-appeal mediocrities: Ben Affleck, Jennifer Garner, Colin Ferrel. When a third-tier property like The Fantastic Four is arranged, we see no name hackery on both fronts, but for the fanboy-safe novelty of Jessica Alba, fresh off of Sin City. There's your increased respect for the genre. Why spend more money when you can be sure the arrested development cases will see the movie simply for being the movie version of their beloved characters, to say nothing of the actual, literal children of the world who care even less if Doctor Doom is actually made of metal instead of wearing armor?

In the case of Batman Begins we have a perfect storm of cynical marketing and fanboy flattery. Christopher Nolan was announced as the picture's director more than a year before it's release, and statements were made that this version of Batman would be more "realistic" and more faithful to the comics, fanboys hungry for that intangible quality of mainstream legitimacy for their hobby were more than happy to begin conflating the two concepts. Like Singer, Nolan was a director of "real" movies, and not flights of fancy as Tim Burton was, after years of praise, now guilty of. The undue adulation for Nolan's promise and fulfillment of a comic book movie that was nothing like a (gasp) comic book in terms of tone or visual impact reveals the fanboys' weakness: contempt for their own obsession and desperate longing for transcendence. Therefore while Burton's Batman was regarded as stylistically and thematically in tune with the spirit of the Batman characters, he was turned on in two seconds when claims arose that the new film would make Batman more like an episode of Law & Order.

Burton has been conflated with Schumacher by the fallacy that the character is capable of a practically realistic live action portrayal, and that the noirish tonality of the material necessitates this.

Based almost entirely on the police-drama type story "Batman: Year One" by Frank Miller, the Batnerd establishment - by which I mean people who actually subscribe to the damned publications, not just sincerely enjoy the character - began revising the "perfect" approach to a live action movie in their heads under the presumption that since Batman and his world were populated entirely by human beings rather than superpowered aliens or science fiction creations, the film should be approached basically as an action-adventure crimefighting story in which costumes were more or less incidental. Batman's outfit is even more overtly a suit of high-tech battle armor than it was in the previous films, and the bat motif was chosen because of several coincidental encounters with the animal before and after his training with a clan of ninjas - the real reason he is inspired to become a vigilante. The one masked villain to make an appearance - The Scarecrow - is a drug dealing doctor who wears a burlap sack over his head to trip out people who are high on his hallucinatory nerve gas.

In other words, the film is insistent that neither is wearing their costume to become the avatar of their true self. It's just convenience and coincidence wrapped around their otherwise mundane M.O. Despite almost all the comics' incarnations being situated in psychodrama, absurdity and Wagnerian power struggles, the fanboys were convinced that to transfer this into live action as Burton had done was silly. Batman was to become as non-fantastical as possible, despite being the adventures of a man who dresses as a bat fighting men dressed as clowns and cats. The new common wisdom is that this is what we should want to see depicted "realistically," simply because there are no literal super powers involved.

Here's an early poster showing Batman falling asleep at his own movie, to reassure that it will be respectfully dull: 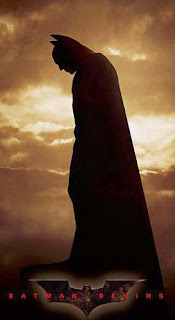 In part 2 I'll explain why Burton's movies, for all their studio-mandated flaws, had the perfect approach and why Nolan's are doomed to boring joyless fanservice of the worst kind.
Posted by Unknown at 6:56 PM